The Cardinals In Time: Baseball Beginnings In St. Louis

During the offseason I will be taking a look at the past, giving readers a timeline of St. Louis baseball throughout history. The plan is to build five years at a time from now through whenever I hit the present. Originally I was going to start at 1900, but I realized that there were stories to tell before then, which is where we will begin today. Hope you enjoy this series!

Before superstars were looking for millions of dollars to play a game, before players had their pick of which car to drive to the park that day, and before uniforms could be tossed in a bin at the end of the game and players could come back the next morning to find a sparkling white one hanging in their locker, there was baseball in St. Louis. Baseball pre-dates television, planes, cars, and even the Civil War. The game was first brought to St. Louis in the 1850s, when a contractor by the name of Jere Frain came in from New York and built a diamond, hoping to spark an interest in his new city for the game he had grown to love.

Throughout the first twenty years or so of baseball in St. Louis, the amateur teams went by several different names, including the Empires and Unions. The teams were loose, unorganized, and utterly terrible, routinely passing down scores of 36-8 and 47-1. In 1874, St. Louis boosters, discouraged and frustrated by the futility, scraped together $20,000 to build a professional team. The team became known as the Brown Stockings, for although the team uniform socks were white, they quickly became brown from tobacco spit and dirt. Gross.

The 1875 season had two games that officially put St. Louis on the baseball map, defeating the Chicago White Stockings twice in the course of three days, winning 10-0 and 4-3. This came after being defeated twenty times in a row the previous year, so the turnaround from that to even a couple of wins was understandably exciting for the St. Louis faithful.

The Brown Stockings lasted just three years as professional team before withdrawing from the National League at the end of the 1877 season. Baseball, however, would not die so easily, and the team continued playing with an amateur status on the corner of Grand and St. Louis avenues, at the site of the eventual Sportsman’s Park. Two brothers – Al and William Spink – held the team together, paying for everything the club would need, creating schedules and even doing their own write-ups on games in St. Louis papers. In 1880 and 1881 the team lost just one game per season. It was after the 1881 season that something truly exciting happened: Charlie Comiskey was brought in to play first base for the large salary of $75 per month. 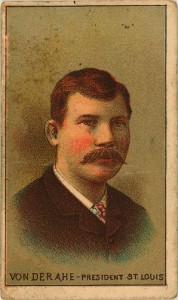 It was based on the play of Comiskey that Chris Von der Ahe was convinced to buy the team and return it to professional status in 1882. He knew nothing of baseball until he started noticing how quickly his bar would fill, then empty, before the start of every Browns game. He then realized that these baseball fans liked their beer, and bought the team so that he could sell beer at the games and make a tidy profit off the fans. He even went so far as to convert a house he owned behind right field into a beer garden where people could drink to their hearts’ content and watch the game at the same time. It was Von der Ahe who first recognized that baseball could be a profitable adventure for an entrepreneur such as himself.

However, thanks to Al Spalding’s tyrannical rule of the National League, beer could not be sold in-stadium at professional baseball games. In 1881, Spalding jettisoned four teams from the NL, two for not finishing the schedule and two for selling beer. A few of these clubs joined together to create the American Association in 1882, and Von der Ahe’s Browns were among the founding members.

A strong showing in 1883 found the Browns a mere one win from winning the pennant, but Von der Ahe could not stop meddling in the affairs of the team. Despite his claims to just be the owner and not know anything about baseball, “der boss president” became the George Steinbrenner of his time, leading his team in parades before every game, telling his team to hit every ball to right field after the team won one game on a ball hit to right, building a life-size statue of himself and pouring all the cash receipts from the day into a wheelbarrow and personally pushing it down to the bank, flanked at all times by two armed security guards. Because of the constant circus-like attitude, there was a merry-go-round of managers for the Browns, until Von der Ahe turned to his then 25-year-old star first baseman, Charlie Comiskey.

Comiskey would take over the managerial reigns before the 1885 season, and Von der Ahe, desiring to see his ballclub become a juggernaut, opened his wallet and created the most expensive team in the country. That 1885 club had a salary of $32,000 spread out over fourteen players, and it was worth every penny. Comiskey led the talented team to four consecutive pennants and one championship, making him the brightest star on the baseball landscape and Von der Ahe the owner everyone loved to hate. Comiskey was not afraid of Von der Ahe, instead taking his suggestions and doing the exact opposite, to the relief of the players and boosters. 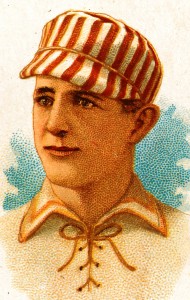 Make no mistake; Comiskey was a brute of a ballplayer, which overshadowed his brilliance as a manager in terms of ability to keep players motivated and playing tough every day of the season. Those who argue that Ty Cobb was the dirtiest player of them all obviously have never heard stories of Comiskey, who would stand in the basepaths and knock unaware runners over, start fights unprovoked and managed a team as wild and unruly as he was. One of his players, Curt Welch, was a known umpire-baiter who consistently found himself in trouble with the law, and this not because of what he did before and after the games, but what he did on the field, causing riots and at times almost critically injuring opposing players! Third baseman Arlie Latham became the poster child for trash talk, finding new and colorful ways to yell and curse both on the field and from the dugout. To top it off, Comiskey and shortstop Bill Gleason were such vile base coaches that the rest of the league insisted upon setting boundaries to keep them in check (you know them today as the coaching boxes up the first and third base lines).

The Browns of the late 1880s were the jerks of baseball, but St. Louis fell in love with their winning ways. Beyond the players mentioned above, the team was led by the one-two punch of Dave Foutz and Bob Caruthers, who had records of 114-48 and 106-38 over the course of 1884-1887. They became the strongest defensive team in the American Association, teaching pitchers how to back up bases, shifting infielders to eat up more groundballs up the middle by having the first baseman play away from the bag, and confusing batters by being in constant motion before and during each pitch. The team also scored runs by the tens, outscoring their opponents by 352 runs in the 1886 season alone and averaging 8 runs scored per game.

However, despite four consecutive pennants, Von der Ahe’s meddling could only go so far, and after the owner refused to pay his players their share of the gate receipts from the 1888 championship series for the second consecutive year, the players lost all respect for the owner. Despite player-manager Comiskey’s best efforts, things were unraveling for the Browns. The 1889 season was suspect, and despite the team only losing the pennant by two games, between forfeits, threats of going on strike, and rather suspect play from the players, it was obvious that the second place finish was not where the Browns should have ended up.

In 1890 salary disputes caused many players in the American Association to defect and create their own league, called the Brotherhood League. It lasted one season, but the point was made, and many owners, after losing a stockpile of money because of their stars disappearing, welcomed back their players with open arms and checkbooks. However, Von der Ahe had not learned his lesson, and while he did allow all of his players (including Charlie Comiskey) to return, he had become even more of a wild card. His ridiculous demands, low salaries and treatment of players caused all of his stars to declare that they were leaving the team after the 1891 season to play for National League teams.

Even with the owner’s trickery, including swinging a deal to wipe out the American Association and join the National League, without Comiskey to show him the way Von der Ahe could not put together a winning ballclub even after gaining a place in the NL. He even attempted to be the manager in 1892, then went through five managers in the next three seasons in an attempt to recreate the magic he had been a part of with Comiskey, Gleason, Latham, Caruthers and Foutz, but to no avail. The media turned on him, as The Sporting News returned to prominence after beginning a personal attack on the curmudgeon of an owner by referring to him as “Chris Von der Ha Ha.”

The downward spiral continued. Five managers sat in the dugout for the Browns in 1896, four more in 1897, and the team went from a 90+ win team to going 29-102 in embarrassing fashion. The nail in Von der Ahe’s baseball coffin came in 1898, when the stadium caught fire. The grandstand, half the bleachers, his saloon, offices, gate money, trophies, clothes and files were left in ruins. Many fans were also injured in the fire, and the lawsuits came fast and furious. Eventually Von der Ahe found himself jailed and disgraced. The other owners of the National League stripped him of the franchise and sold it to Frank and Stanley Robinson in 1899.

The Robinsons were the owners of the Cleveland Spiders of the American Association, and quickly transferred the best of their Cleveland players to St. Louis, including a pitcher named Denton ‘Cy’ Young. To revamp the club’s image the owners changed the look of the team, including changing their socks from brown to a bright red, and the name shifted from Browns to Cardinals. There is some debate as to how this change came about, some crediting a journalist and others a relative of the owners. I prefer the latter, which is the one I will close this post with.

Upon seeing the revamped team for the first time in 1899, a young woman turned to a club official and said, “My, what a lovely shade of cardinal!” The name stuck.