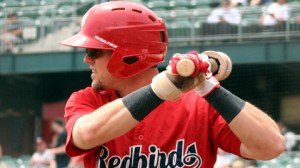 Even though last Saturday’s Farm Report was the final Farm Report of the season, that does not mean Matt Kelsey and myself are going to step away from the Minor Leagues all together. In fact, Matt and I plan on keeping you informed about all of the Cardinals and Royals Minor League clubs and players even though most of them will not be playing. So don’t worry, we will still be ranting about prospects well into the offseason.

I think I speak for both Matt and myself when I say that the Farm Reports were certainly a learning experience. My MiLB-knowledge right now compared to when we first started the Farm Report feature is night and day. Since we did the FR’s every week, we had to stay on top of all Minor League news.

While doing that, I quickly realized that there are promising players in the system that the casual fan has no idea about. Fans have studied Shelby Miller and Allen Craig all throughout the season, but what about the diamond in the rough playing in Batavia, or Johnson City? Most do not pay any attention to them whatsoever.

That is about to change. Here are 10 players that I feel have plenty of upside, but do not always get the respect that they deserve.

Oscar Taveras, OF
This is one of the guys that the Cardinal scouts are extremely high on. Luhnow said he was easily one of the top 10 prospects in the system, and could move through the ranks very quickly. He’s an 18-year-old outfielder in his first year with a United States farm team. In the 2010 season Taveras hit at a .322 clip with a .526 slugging percentage and an OPS near .900 in over 200 at bats. For a player in his first year in the United States, that is extremely impressive. The only thing that really sticks out to me as something he must work on is his plate discipline. He swings at a lot of bad pitches and rarely walks (12 BB in 229 PA). He does have power potential, even though most think of him as more of a scrappy kind of player. In Johnson City he hit 8 home runs, drove in 43 runs, had a .204 ISO, and of course that high SLG.

Mark Hamilton, 1B
I know, he doesn’t exactly fit the prospect description. I understand that he is 26 years old, kind of injury-prone, and strikes out a lot, but this guy can hit. Most do not give him the “prospect” label simply because there is not much hype around him. You can thank Albert Pujols for that one. It’s not Mark’s fault that he is blocked by one of the best hitters of all time. If he was an outfielder, he would probably have made his debut much sooner than earlier this month. Hamilton is currently playing for the big league club, but spent most of the season in Memphis. In 306 plate appearances, he hit .298/.389/.585 with 18 home runs and a .287 ISO that was good for sixth-best in the league.

Hector Corpas, RP
Here’s another guy much like Taveras. The 2010 season was the first the 20-year-old spent in the country, after dominating in Venezuela in ’09. Corpas only pitched 25.2 innings for Johnson City, but they were certainly effective. Hector ended the season with a 2.10 ERA and a 0.85 WHIP while only allowing one home run and three walks in over 25 innings. He throws a mid/high-90s fastball and a high-80s splitter that has been described as MLB-caliber.

Aaron Luna, LF
I’ll be honest, it is really hard to put a finger on this guy. As I said earlier in the season over at Rising Redbirds, Aaron Luna is without a doubt one of the most interesting prospects I’ve ever come across. He’s only 5’11” and his nature position is second base. That usually doesn’t indicate power, correct? While his 14 home runs in 289 at bats in Springfield aren’t extremely impressive, his .201 ISO (great estimate of true power) is the eighth best mark in the league. However, the most interesting thing about Aaron is his abnormally high rate of being hit by pitches. To say the least, it is odd. If you combine the numbers from 2009 and 2010, Luna has been hit by a pitch 55 times in two seasons. That, and his good plate discipline have led to the best OBP in the Cardinals Minor League system.

Thomas Pham, CF
I’ve had mixed feelings about this guy all along, but I’m starting to like what he brings to the table. He spent most of the season in Palm Beach where he struggled to hit above .260, but quickly impressed people when he got the call-up to Springfield. In 140 appearances, Pham hit .339/.429/.537. While he does strike out a lot, his patience at the dish accounts for his 14% walk rate. For example, even though he only hit .262 in Palm Beach, his patience led to a .375 OBP.

Michael Blazek, SP
Shelby Miller receives all the attention in Quad Cities, and rightfully so. He’s phenomenal. But Michael Blazek, Miller’s teammate, has been awfully good so far in his young career as well. Management has been very cautious with Michael in the past, but it seems as if they loosened the leash on him in 2010. In the last two seasons, Blazek pitched a total of 107 innings. In 2010, he pitched 103 innings, and it sure did pay off for the River Bandits. Blazek went 8-4 with a 2.71 ERA and 1.05 WHIP while only allowing five home runs in 32 games. He also struck out 104 batters in those 103 innings.

Brandon Dickson, SP
This guy is starting to become one of my favorites. Like I said on I-70 Radio last Monday night, Dickson has been the most effective and most consistent pitcher in the Cardinals system when looking at the entire season. That is exactly why I named him the Pitcher of the Year in last week’s Farm Report. The 25-year-old led the PCL in FIP, was sixth in ERA, fifth in GB%, fifth in innings pitched, sixth in TBF, and second in strikeouts. He will likely make his debut with St. Louis in 2011, and we should all be looking forward to that.

Scott Gorgen, SP
After the start of the 2010 season, Gorgen was considered one of the top prospects in the system before he injured his throwing elbow. Before he was benched for three months with the injury, Gorgen made eight starts and only allowed six earned runs. Even though he was no longer starting, Scott was just as good after the surgery. All together, Gorgen put together a 5-1 record while sporting a 1.26 ERA and striking out 46 batters in 50 innings pitched.

Rainel Rosario, LF
All I need to say about this one is .933. That is is OPS. It’s extremely good, but not a number that just jumps of the page, right? Wrong. In the past 18 seasons, there have been only 12 players with at least 100 at bats that ended the season with an OPS higher than .900 in Quad Cities. Nine of those 12 players have played for a Major League team. Only one of the 12 did not make it to the Majors in his career. The other two are Xavier Scruggs and Rainel Rosario. Says a lot, wouldn’t you say? The only thing that concerns me about Rosario is his strikeout rate. He K’s in about 25% of his at bats.

Ryan Jackson, SS
I saved one of the best for last. Ever since he was drafted last season, I’ve been high on this kid. He may not hit .330 in the big leagues, but you can bet that he is going to be a reliable option. The main thing that I love about Ryan Jackson is how hard he hits the ball. After watching video of him tearing the cover off of every ball thrown at him in 2009, I checked his line drive percentages. Sure enough, Jackson led the FSL with a 28% LD rate.

Justin Hulsey covers the Cardinals for i70baseball and his blogs, Cardinals Front Office and Rising Redbirds that are also dedicated to Cardinals baseball and their minor league system.You may follow him on Twitter @JayHulsey by clicking here.

2 thoughts on “Under The Radar Cardinal Prospects”