With less than a week to go in major league baseball’s regular season – a season that has been excruciatingly long from the perspective of most St Louis Cardinals fans (like me); I still find it hard to believe how a team with so much talent could play so poorly against so many poor teams.

It really boggles the imagination when teams like the Chicago Cubs, Pittsburgh Pirates, Milwaukee Brewers and Houston Astros – all sub .500 teams, playing in the NL Central – made the Cardinals look pathetic for the better part of the last two months of the season.

Somewhere in the wreckage of this dismal 2010 Cardnals season, lies a slew of embarassing trivia questions, highlighting the team’s almost daily “record-setting” futility. I suppose for the beleaguered fans who are fascinated with such trivial pursuits, this may make the offseason “hot stove league” discussions a bit more entertaining. Certainly, there will be lots of discussions going on throughout Cardinal Nation this winter, as we collectively try to come to grips with this unprecedented team failure, and speculate on the future of the franchise, both in the short-term and long-term.

Obviously, the front office will have its hands full in dealng with all the issues facing the team; first and foremost is the pending contract negotiations with Albert Pujols; if they are able so come to terms with the greatest player in the game today, without mortgaging the team’s financial future, they should be able to return to “National League Elite Status” in a reasonably short period of time; like next year. Yes, I am an eternal optimist, but the Cards still have a very strong nucleus which should be able to perform at a superior level of play for years to come; the meltdown of 2010 notwithstanding.

For diehard fans of the Cardinals interested in testing their Redbird trivia skills, as we prepare for a postseason with no St Louis representation, I have some good news. 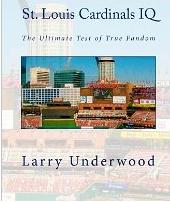 I recently published a fun-filled and informative trivia challenge: “St Louis Cardinals IQ – The Ultimate Test of True Fandom” – 250 questions that will challenge your level of expertise on the team’s rich history, along with the many great players and notable achievements (even some dubious achievements) that have occurred since the team first started playing in the National League over a hundred years ago. Since I have been following the Cardinals for over 50 years myself, compiling the list of questions was a fairly easy process. Much of this stuff I personally witnessed, so I just used my photographic memory to conjure up the details of the people, places and events that made Cardinals history. Some of the other stuff I recall reading about somewhere or hearing about from somebody; just about everybody I know who follows the Cardinals as avidly as I do could have easily written their own version while covering an entirely different set of 250 questions. That reminds me, I still have to write the second volume of this book, with another 250 questions for fans to answer (or try to answer), hopefully, in time for the 2011 season. I wonder how many bits of trivia contained in this current season of agony will go into the new edition? My guess: Probably more than most fans would care to admit!

One thought on “Good News For Cards Trivia Junkies”