The infamous “Denkinger call” from game six of the 1985 World Series is a heated topic for fans of both the Royals and the Cardinals. It boils the blood of St. Louis fans, and turns Royals fans defensive while arguing the Cardinals had ample opportunity to win game six, not to mention game seven. Both sides view is clouded by emotions.

But there is a way to objectively quantify the effect the call had on the game: win expectancy (WE). Some ingenious baseball nerds fans have mined the data of play-by-play accounts from a huge number of baseball games to determine the percentage of time teams win in every game situation (inning, score, outs, and base runners). Viewing the Denkinger call through the perspective of win expectancy provides a new way to look at a very old argument.

The scene: October 26, 1985, Royals Stadium, Cardinals leading the Series 3-2, leading the game 1-0, bottom of the ninth, nobody on, nobody out. Win expectancy tells us that the team with the 1-0 lead at this point in a game wins 81% of the time. Jorge Orta comes off the bench and digs in against Todd Worrell, also taking the field for the first time in the game. Worrell jumps ahead to a 0-2 count. Orta fouls off the next pitch before bouncing one to the right side. Worrell covers first and Orta is out by a country mile…but first base ump Don Denkinger calls him safe.

Cardinals up 1-0, bottom of the ninth, man on first, no outs: The Cardinals win expectancy dropped to 67%, a change of 14%. But what if Denkinger got the call right? The Cards would have been just two outs away, with no runners to worry about. And their win expectancy would have jumped to 89%, an increase of 8%. The swing between “out” and “safe” was 22%. 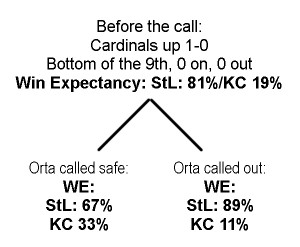 So what does that mean for Cardinals and Royals fans? Perhaps it means they are both right. There is a significant difference between an 89% WE and a 67% WE. The blown call clearly had an effect on the game, and Cardinals fans are right to loathe it. On the other hand, that the Cardinals had a 67% WE even after the call means that it was still their game to lose. The players determined the outcome from there. It was only when the batter after Orta, Steve Balboni singled, advancing Orta to second, that the WE swung ever so slightly in the Royals favor (52%). And when the next batter, Jim Sundberg, bunted and Worrell threw Orta out at third, the WE again stood in the Cardinals favor (66%)—once again, the Cardinals game to lose. A passed ball by Darrell Porter that allowed the runners on first and second to advance a base put things back slightly in the Royals favor (55%). An intentional walk to Hal McRae had a nominal effect on the WE before Dane Iorg became the hero with a walk-off single. Many plays involving many players determined the outcome after the Denkinger call. Not to mention that the Cards and Royals played game seven the next night, both with a WE of 50% before the first pitch. But then again…I’m a Royals fan.

Aaron Stilley does the blog thing here and makes the tweet tweets here.

10 thoughts on “22%: Quantifying The Denkinger Call”