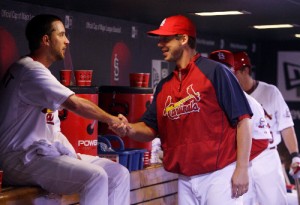 It is hard to describe how frustrated I was to have missed all of Adam Wainwright’s twentieth win this past Friday in Chicago. It is just one win in a season that people have been referring to as everything from disappointing to perplexing, but to this fan, it was frustrating to miss this win in particular. 20 wins in a season seems to be a benchmark for pitchers, much like hitting .300, hitting 30 home runs or driving in 100 runners would be for a hitter. Speaking of…

Despite a year in which Albert Pujols has had some rather disappointing stretches (at least by his standards), he yet again finds himself near the top of the statistical leaderboards. He currently sits in the top five in batting average, slugging percentage, on-base percentage, on-base plus slugging percentage, home runs, runs, runs batted in, hits, extra base hits, walks, and intentional walks. Just for good measure, he could probably throw in a strong bid to win another Gold Glove.

I think I have reached acceptance with the fact that this Cardinals team is not going to be playing in October. The ‘tragic number’ has not yet hit zero, so the optimist in me is still holding out hope, but the realist in me took over a few weeks ago. However, winter is long and cruel, and I refuse to accept its closing in until baseball is over. For me, baseball is not over until the last pitch of the World Series. So for the past few weeks, what has there been to cheer for as a Cardinals fan? 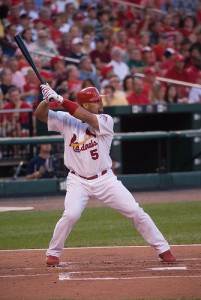 The stats. I have been cheering for the team, the players, the standings all season long, but down to the wire, all that has been there is the stats. It was cheering for Albert Pujols to make his tenth consecutive season of hitting .300 with 30 home runs and 100 RBI. It was cheering for Adam Wainwright’s 20 wins. It was hoping that Matt Holliday could continue his 16 game hitting streak (which ended Saturday in Chicago). On those days where it seems like the team is laying (another) egg, why not find something else to cheer for?

Invariably, whenever someone mentioned this topic, the cynics and extreme realists will angrily shout about baseball being a team game, statistics meaning nothing when the team is not winning and in the playoffs, and wasting the prime years of various superstars’ lives by not bringing home championships year after year. To that I say those people are not wrong in the slightest. It is frustrating to see the team lose, and it will not make things better just because someone finds their name on a plaque at the end of the season. Individual achievements are not the goal.

What if this team had not had so many expectations placed on it at the beginning of the year? Would the stellar play of the teams’ various superstars seem more amazing then? Would fans be able to appreciate a 20 win Cy Young-caliber season, .300/30 HR/100 RBI, 5 All-Stars and a solid Rookie-of-the-Year candidate? Possibly.

In 1998, Mark McGwire hit 70 home runs. Does anyone even remember where the Cardinals finished that year? 83-79, in third place, and well off the pace set by the division leading Houston Astros, who finished 102-60. I certainly did not remember that of my own accord. What I do remember is being captivated all season long by long home runs, heart-stopping swings, and the joy of following the stats.

That was a fun season to be a baseball fan. 2010 had some fun in it too. I seem to recall an eight game winning streak, strong debut seasons by several individuals such as Jaime Garcia, Jon Jay and Fernando Salas, and the aforementioned years by Wainwright and Pujols. We smiled and cheered and clapped for every win, every stolen base, and every ‘meaningless’ statistical marker. I know the end result is not what we fans were hoping for, but admit it, you had some fun along the way.

If you didn’t, why are you still reading?

2 thoughts on “It Is (Not) Okay To Cheer For Stats”