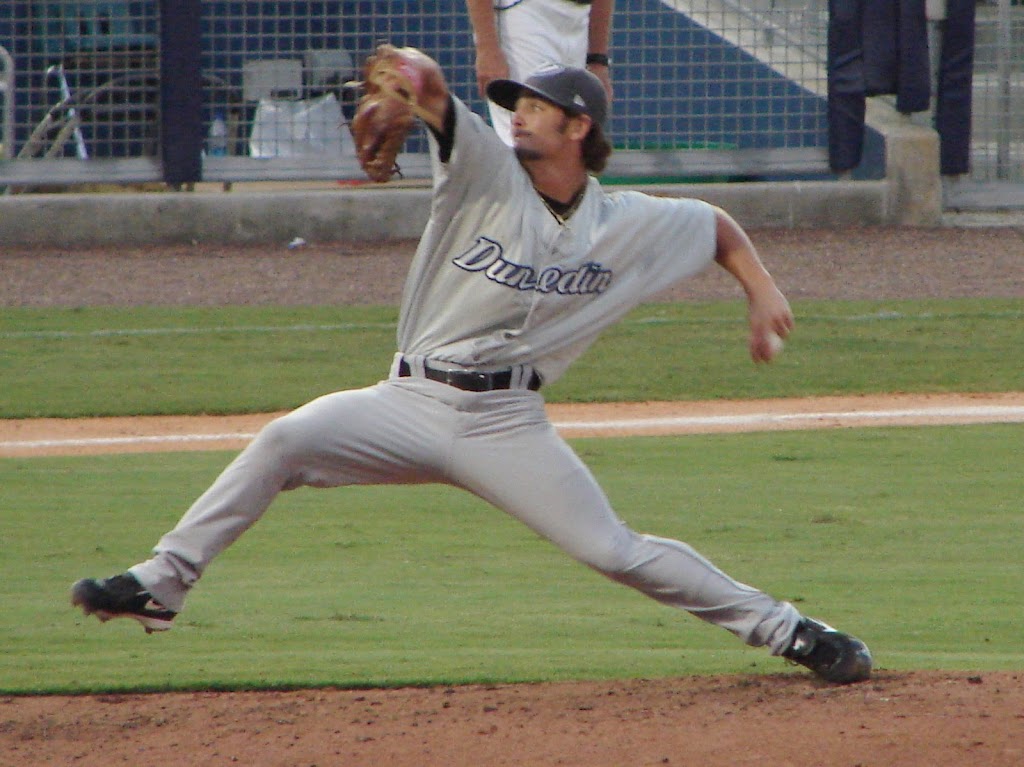 For the last Royals Farm Report of the 2010 season, we feature a player who received a surprising post-season honor alongside four of the Royals’ most highly-touted prospects.

Relief pitcher Tim Collins was named to the Baseball America 2010 Minor League First-Team All Stars, one of five Royals prospects so named.

Not bad company for a player who was undrafted and who came to the Royals via trade earlier this season.

(SIDE NOTE: Of the 15 players on the Baseball America First Team, five of them are Royals prospects. The Tampa Bay Rays are the only other team to have multiple prospects on the list – and they have two.)

Collins was actually traded twice during 2010, first from the Blue Jays to the Braves. Then the Braves traded him, along with center fielder Gregor Blanco and relief pitcher Jesse Chavez for veteran reliever Kyle Farnsworth and outfielder Rick Ankiel. Blanco and Chavez have already made an impact on the big-league Royals, but Collins promises to be the best of the bunch – by far.

The upside is huge for Collins. Look for him to compete for a bullpen spot as soon as next season. At the high end, he could be a dominant setup man for Joakim Soria – or even a closer to replace Soria. On the low end, he is a strong lefty specialist.

Although the O-Royals finished in third place, they were only one game back from the division winner in 2010.

The big news for the O-Royals in 2011 will be a move away from Rosenblatt Stadium to Sarpy Ballpark in downtown Omaha. They will also experience a name change based on a fan vote.

The Naturals were arguably the best team in the entirety of Minor League Baseball in 2010, securing a Texas League championship earlier this month.

The Blue Rocks had a losing record in 2010, but several players showed promise and poise, including pitcher John Lamb and catcher Wil Myers, both of whom promise to be a big part of the organization in the future.

Moustakas lived up to his potential this season, dominating at two levels of the minor leagues. The young third baseman was the Royals’ first round pick (No. 2 overall) in the 2007 draft, and prior to this season he had struggled at the lower levels of the minors. Now Moustakas looks like the bona fide star everyone hopes he can be. Look for Moose to compete for the starting third base job in Kansas City next season.

Perhaps more than any other position on the diamond, the Royals are absolutely set at first base. How exciting is this: the two first basemen in Kansas City right now, Billy Butler and Kila Ka’aihue, may be the third- and fourth-best first basemen in the organization. Arguably, the best are Robinson and Hosmer. Robinson, the starting first baseman in Northwest Arkansas all season, hit an impressive .335 with 29 home runs and 98 RBIs. Hosmer, a first-round pick by the Royals, bashed 20 homers and hit at a .338 clip over A+ and AA this season.

The Royals may have more highly-touted pitching prospects, but nobody in the organization this year – from the top down – pitched better than Teaford. He was demoted from Omaha to Northwest Arkansas after only one rocky start, but for the Naturals he picked up 14 wins and a 3.36 ERA (that number goes up by nearly half a run when you include the one start in Omaha). Teaford was a huge part of the Naturals’ championship run.

The aforementioned Lamb pitched at three levels of the minors this season, starting all the way down in low-A and moving up to AA by the end of the year. Over 28 starts, he compiled a stellar 2.38 ERA and struck out 159 batters.