As Cardinal fans accept reality and come to terms with the fact that their beloved team has virtually thrown in the towel, it seems like we all want to start pointing fingers. Sadly, fans are more interested in the “blame game” than the actual baseball games.

For the majority of the season, as this team continued to struggle off-and-on and I continued to get more and more uneasy, I found it impossible to figure out what exactly was wrong with this team.

On paper, the team appeared to be great. Correct me if I am wrong, but I think most Cardinal fans were expecting an October run. I know i70baseball Editor Bill Ivie suggested that if the Cards did not win the pennant, the season would be a huge disappointment. Considering how I felt coming into the season, I completely agree with Mr. Ivie.

That’s exactly what this season was. The perfect example of a disappointment. Not to mention, one of the most monumental collapses any team has gone through in recent memory.

What’s wrong with this team?

Third base is obviously an issue. The middle infielders have had very sub-par seasons both in the field and at the dish. The injuries to Brad Penny and David Freese have been crucial to the depth of this roster. The acquisition of a fifth starter ended up being the acquisition of a fourth starter, which then left the fifth spot empty with only Lohse and Suppan to fill. Am I forgetting something? I surely am.

Then we get to the off-the-field problems. What in the world happened with LaRussa and Rasmus? Does anybody truly know? I don’t think so. That’s the clubhouse chemistry rift that continues to get the bulk of the attention, but nobody is talking about something that could be destroying the Cardinals offense. Not only this season, but possibly in the future as well.

Something is obviously wrong with the bats. They seemed just fine throughout the first half of the season, but there is no denying that even then they were off-and-on. In the past month or so, the offense has really hit a wall. Why is that?

My theory: The contrasting philosophies of Tony LaRussa and Mark McGwire. 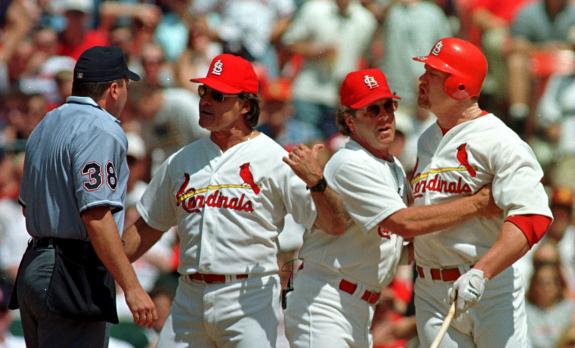 First of all, can we please stop bashing Mark McGwire?

He’s not even through his first full season as a coach and people are throwing him under the bus? That makes zero sense. Let the man instill his ideas. It does not happen over night. Were you expecting Steve Spagnuolo to instantly make the St. Louis Rams a playoff contended? No. Using some fans’ logic, he should be fired too.

Also, let’s try thinking outside of the box and stop being so simplistic at times. Think stuff through, Cardinal Nation. Let’s really dig into this before we think firing the hitting coach will solve all problems.

Mark McGwire has a very, very intelligent approach to hitting. “You think he’s just so big and strong and that’s why he hits home runs, but he really knew what he was doing at the plate,” says second baseman Skip Schumaker, who has been a student of Mac’s for several years.

McGwire preaches consistency in your swing. He wants his players to take the shortest path to the ball with their hands before swinging through the ball. This will basically eliminate loops and non-essential movement in a player’s stroke. Less movement equals less room for error, and Big Mac could not be more right about that.

He knows what he is talking about, folks! McGwire’s philosophy is solid, and I honestly think he is a good hitting coach. The problem lies in his boss.

While Mark’s ideas are considered old-school and traditional, TLR coaching ways are (I know this is hard to believe) actually very modern. When it comes to baseball, and hitting especially, Tony is a video addict. He believes you can correct yourself and anticipate what a pitcher will do by watching video.

Big Mac has always said today’s players, young and old, depend way too much on video and advanced scouting reports. McGwire wants his hitters to trust their natural ability instead of falling in love with video, much like LaRussa has.

Think about this:
Tony LaRussa is very familiar with his coaching staff. For the most part, it has stayed together through the years. With the exception of one position. Hitting coach. TLR has had several hitting instructors and none of them have had profound success in St. Louis. Most of them were run out of town. Is it crazy to think that maybe, just maybe, it is LaRussa that can’t figure out hitting? I have a hard time believing that every single one of the hitting coaches that have come through St. Louis since the 90’s have all – for lack of a better term – sucked. Something tells me that it could be what their boss is making them teach. Maybe that’s what is wrong, not the actual coaches.

To me, it seems like McGwire is still trying to use his ideas. I respect that, but what happens when you have one coach teaching one approach and another coach (yes, LaRussa does coach) teaching the exact opposite approach? What are the players supposed to do? What is McGwire supposed to do? Talk about friction.

The most unfortunate part about this is that, for some unknown reason, management has not been able to get these two brilliant baseball minds on the same page. Wouldn’t you think that’s something that should be gone over right after, or even before Mark is hired?

I’m not saying either hitting philosophy is wrong. What’s wrong is when you have a coaching staff that is not on the same wavelength. How can you build chemistry with the players when their bosses are butting heads all season?

I don’t have any insider information or anything like that. I wish I did, but I don’t. This is simply a theory that I believe makes a lot of sense. What I am sure of is that the St. Louis Cardinals have more problems off-the-field than on, and they must be addressed before fans experience yet another disappointing campaign. 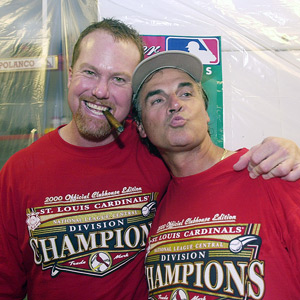 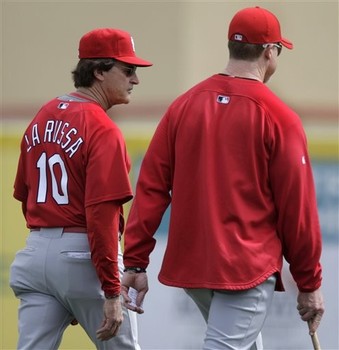 Justin Hulsey covers the Cardinals for i70baseball and his blogs, Cardinals Front Office and Rising Redbirds, that are also dedicated to Cardinals baseball and their minor league system.You may follow him on Twitter @JayHulsey by clicking here.