All too often in life, there is simply no justice. And there may be no sport that demonstrates this fact as clearly as baseball does.

You have seen it in the tiniest wrinkles of the game’s fabric. The bloop single that ends a no-hit bid, or the rally cut short by a blistering line-out right at a defender with the bases juiced. You have seen it represented in larger samples as well. Such as when the 2001 Seattle Mariners, dominant all season in collecting a record 116 wins, were able to manage only a single victory against the Yankees in the ALCS. Or when the Saint Louis Cardinals were unable to convert regular season mastery into World Series success, both in 2004 and 2005…further illustrated by the fact that a vastly inferior squad was able to so unexpectedly achieve October glory in 2006.

Jason LaRue will likely vanish into a San Antonio sunset after a three game set in Pittsburgh that begins tonight. The trip to PNC gives LaRue an opportunity to enjoy a final road trip with his teammates, while also allowing the former backup backstop to see a specialist regarding severe concussion symptoms still lingering from the well-documented melee with Cincinnati Reds players on August 10th. Most notably, with Reds pitcher Johnny Cueto who, while pinned against the netting behind home plate, flailed about wildly with spike-clad feet, landing multiple blows to LaRue’s face and head.

Cardinals fans were not even given the opportunity to shower Cueto with their displeasure upon the Reds’ recent trip to Saint Louis, as Cueto was absent the team with a “family issue”. Redbird faithful were left to pummel Brandon Phillips with the full brunt of their frustrations instead, though his crimes against the home team must now be considered misdemeanors in light of the recent announcement that LaRue is retiring due to the aforementioned medical concerns.

The hell with Brandon Phillips. He is a sideshow. He is the guy in a drama film who is inconsequentially disposed of in some manner and immediately forgotten about by the audience. He is a mouth. And a mouth from which remarkable ignorance is spoken. Truth be told, a stadium of complete silence, or perhaps the entire crowd dispersing into the corridors all at once upon each of his at-bats, would have likely been more effective in punishing such an attention-starved excuse for a ball player.

Johnny Cueto, on the other hand, is a different animal entirely.

Let us try to move past the juvenile and reckless act of kicking with eyes closed like a frightened pussycat, as I know virtually nothing about Cueto the person. No reader fixated upon these words is without a fear so paralyzing that they could not also be rendered neurotic. Perhaps that was not the first time little Johnny Cueto found himself beneath a pile of men (go with that where you wish), or perhaps he is truly terrified of enclosed spaces. In all seriousness, we know nothing of the traumas that might lie at the heart of such an abhorrent display of behavior. I ask that you all take a look in the mirror and consider this. But please, also be careful to not confuse my thoughts for anything other than what they are…pity for a weak and pathetic man.

Still, the fact remains. This scared little kitty was not declawed and significant damage was done. Of course, painful headaches and nausea have taken their toll, but LaRue has reported that even simple tasks – such as driving a car, cooking, and watching television – have been difficult throughout his ongoing recovery. And regardless of whether LaRue had intended to play beyond 2010, for all intent and purposes, that decision was made for him by Johnny Cueto. Emphasized with each kick to his skull.

I am proud to call myself, at least as it relates to baseball, a purist. I love a pitchers duel, loathe the stat junkies, and like Bull 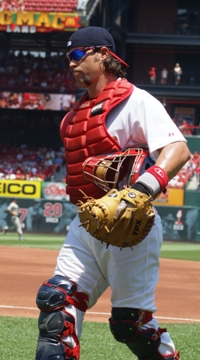 Durham’s Crash Davis, believe that there should be a ban on AstroTurf and the designated hitter. I waffle agonizingly between whether instant replay is a positive or not, and those who know me well know that I don’t waffle about much. But there are times when tradition hinders the correct action of an institution, and the “punishment” Cueto received is an excellent example.

Jason LaRue’s career is over and his long-term health may very well have been compromised. Johnny Cueto missed one game. Essentially, this translated to an extra day’s rest en route to postseason play. (Cue the violins)

Questions beg to be asked. What if the “severe bruising of the brain” administered by Cueto had ended the career of Yadier Molina? Or Joe Mauer? Or Jorge Posada? Or Victor Martinez? Or Jason Varitek? Does the MLB players union file grievances for such matters or do they only step in on contract negotiations? (Yes, that was sarcasm.) What if the recipient of an indefensible beating had not been some second-stringer with a mullet and a career batting mark of .231? What then? Should any of that matter? Obviously, the answer is no, but we all know that is not the case. Meanwhile, pop some “greenies” and promptly get suspended for 50 games. I’m not sure I follow the logic, Mr. Selig.

Oh well. I suppose it is not my business. Concussed and all, LaRue is free to make up his own mind. He was said to have considered taking legal action against Cueto, which would seem veritable given the criminal nature of the inflictions and the revenue potentially lost, but he has apparently decided against this. His retirement will be unceremonious and the Cardinals organization will probably be too “classy” to retaliate in 2011.

So the fact remains, ringing true in this beautiful game of baseball just as it does in most all worldly affairs: sometimes there is simply no justice. Unfortunately, there is no longer a Bob Gibson either.