The classic “back of the baseball card” offensive measures have always been batting average, home runs and RBIs, but the advanced stats explosion of the last 20+ years has exposed how limited those figures are. The main flaw with batting average is that it completely ignores plate appearances that result in a walk. RBI numbers are influenced heavily by something out of a player’s control: runners on base ahead of him. Home runs are of course great, but reflect only a tiny portion of how a player has fared at the plate.

Massively more telling metrics have been developed and are slowly gaining acceptance. On-base percentage (OBP) is a huge improvement over average since it includes plate appearances that end in a walk (and hit-by-pitch). It remains an incomplete measure, however, since it treats vastly different outcomes the same; as beneficial as walks are to an offense, they are obviously not worth as much as home runs, but OBP does not distinguish between them. Slugging gives different credit for various outcomes, but ignores walks and does not accurately weigh the different types of hits; a double is not worth twice as much as a single, a homer is not worth four times a single, etc. On-base plus slugging (OPS) attempts to make up for the flaws in OBP and slugging by adding them together, which results in a great stat. OPS does give a telling indication of how effective a hitter is. But it retains some of the flaws inherent to OBP and slugging, as well as putting too much weight on slugging relative to OBP.

Enter weighted on-base average, or wOBA. Developed by stats maven Tom Tango, wOBA is a near-perfect offensive stat. Through analysis that is over my head, Tango determined the relative benefit of walks, hit-by-pitches, reaching base on errors, singles, doubles, triples and home runs. He then scaled those relative weights such that the resulting stat is on the same scale as OBP. In Tango’s words, “an average hitter is around 0.340 or so, a great hitter is 0.400 or higher, and a poor hitter would be under 0.300.” The exact formula for wOBA is: (0.72xNIBB + 0.75xHBP + 0.90x1B + 0.92xRBOE + 1.24x2B + 1.56x3B + 1.95xHR) / PA. (FanGraphs.com lists wOBA.)

So wOBA is a beautiful thing. But as with any stat, comparing wOBAs from different seasons can be misleading, thanks to the yearly ups and downs in overall offense. In order to get numbers that can be compared across years, a player’s wOBA can be divided by that season’s league average wOBA to get an idea of how much more or less effective he was as a hitter than the rest of his league that year. To get to a wOBA+ stat, that number is multiplied by 100, meaning an exactly average wOBA performance results in a 100 wOBA+, a wOBA that is 10% better than league average results in a 110 wOBA+, and a wOBA 90% of league average results in a 90 wOBA+. The formula looks like this: 100 x (wOBA/lg avg wOBA).

You don’t need advanced stats to know this was the greatest offensive season in Royals history. There’s no debate that 1980 George Brett was as good as it gets. Readers of this site appreciate the incredible talent of Albert Pujols, but Albert is yet to approach a wOBA of .479. (.462 in 2003 is his career high. Of course, Pujols’s .434 career wOBA dwarfs Brett’s .374.)

Big John Mayberry has an impressive three of the top six spots on this list. Mayberry terrorized AL pitching between 1972—75.

Probably not a coincidence that George’s two best years are the same two years the Royals have gone to the World Series. 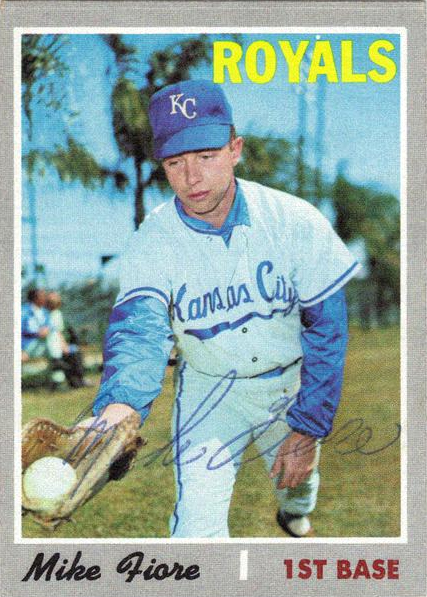 This is the one surprise on the list for me. Fiore had played just six major-league games before the Royals scooped him up in the 1969 expansion draft. Thanks to the unimpressive batting average, my guess would be this excellent season went largely unnoticed in 1969 (though fans must have taken notice when he hit the first home run in Royals history on April 13). His .420 OBP remains the fifth highest in Royals history. Fiore would never put up even decent numbers again however, and the Royals shipped him to Boston in 1970. He was out of the majors after 1972. (One caveat to the pre-1973 seasons—the league average includes pitchers hitting stats, inflating wOBA+ for position players a bit.)

That guy was pretty good.