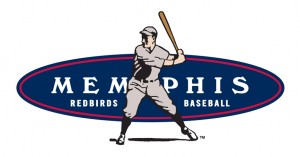 Considering the fact that there are less than 300 miles between the St. Louis Cardinals and their AAA affiliate Memphis Redbirds, one would think the two teams have fairly similar stories.

If you think that, you could not be more wrong.

Beyond the fact that both teams play baseball, wear the birds on the bat, and shared some of the same players this year (Allen Craig and Fernando Salas have worn quite a path between the two cities this season), it would be tough to find two teams that are more polar opposites of each other.

Face it, most regular baseball fans pay little to no attention to minor league teams on a daily basis. They watch their major league team, check the standings, and go about their day. Players who get called up from the minors are just a cursory note in the newspaper or on the team website until they do something to get the regular fan’s attention.

While many believe that the fans in Cardinal Nation are of above average baseball intelligence, I imagine many of them fit this description quite nicely, including myself up until the last year or two. Life is too busy, or the minors just not interesting enough to keep track of what player is where and how each team at each level is doing. Minor league teams have fans, but they are usually localized around where each team is located. There are not a lot of Johnson City Cardinals fans running around out there, because most people either have no idea where Johnson City is (Tennessee – and yes, I had to look it up), or have very limited interest in how a rookie-level baseball team is doing.

With the still relatively new state of social media, many fans have been brought into a more aware state of how their teams’ minor league affiliates are faring on a daily basis. While the fanbase for any minor league will never be as large as one of the big league squads, I know many fans that have become fairly recent members of the Baby Birds, an affectionate name given to the Memphis Redbirds. 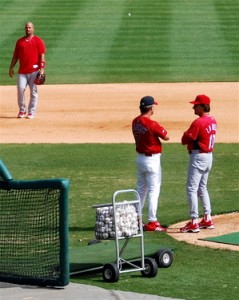 Tony LaRussa. Every baseball fan knows the name, and many know his track record. He began coaching in 1979, is third on the all-time career wins list for managers, is a two-time World Series winner and four time Manager of the Year winner (three times in the American League, once in the National). He has a law degree, has had books written about him, and even put his name on some video games back in the 1990s. He plays old school, hard-nosed baseball and believes that teaching absolutely does not occur at the big league level.

Chris Maloney. Google barely recognizes Maloney, instead thinking you are searching for the Law and Order: SVU actor Christopher Meloni. If that is not an indication of how little is known in the world about the Memphis skipper, not much else will convince you. Maloney is in his fourth year at the helm for the Redbirds and his nineteenth overall as a manager, despite being just 47. He has won Manager of the Year honors in three different leagues (New York-Penn, South Atlantic and Texas) while also being named the Minor League Manager of the Year by Baseball Weekly in 1993. He led the Redbirds to their 2009 AAA championship. He is a strong advocate for teaching, trying to stay consistent and constantly improving.

As you can see, the comparisons here are nil, minus that whole ‘birds on the bat on their jerseys’ thing.

The Cardinals sent five players to the All-Star game this year – Albert Pujols, Matt Holliday, Yadier Molina, Adam Wainwright and Chris Carpenter. At various times this year, all of those players have been labeled as potential MVP, Cy Young or Gold Glove Award candidates.

This is without mentioning Jaime Garcia, who this week had to make his case to management to stay in uniform and on the field for the rest of the year instead of being shut down after extending his career innings workload a mere year after having Tommy John surgery. It also fails to point out David Freese, who, until being sidelined indefinitely with a series of ankle mishaps, also found himself thrown in the Rookie of the Year talks with Jaime. Jon Jay, another rookie who made the jump up and down from Memphis once or twice before sticking in St. Louis early in the summer, has also made his mark on the big league club.

The rest of the starters include Colby Rasmus, who came up through the system and looks to still play a strong part in the future of the Cardinals, Brendan Ryan, who has struggled this year with the bat but ranks at the top of the shortstop heap with his glove, and Skip Schumaker, who has brought up his hitting statistics to a more reasonable level after having an incredibly short start.

Down in Memphis there are ballplayers. Not many of them look like superstars. There are no Stephen Strasburgs or Adrolis Chapmans hanging out, just waiting for the call to swing up to the majors and be the star everyone knows they will be. Some of the stars of the Memphis roster – namely Allen Craig, Fernando Salas, Tyler Greene and Jon Jay – have been on the yo-yo between the perks of the bigs and the buses of the minors. Others like Nick Stavinoha, Joe Mather, Adam Ottavino, Evan Maclane and PJ Walters have all been on and off the roster due to injuries and cups of coffee in the majors. Towards the end of the year Lance Lynn made a splash by striking out 16 en route to the winning the game that would send the team to the PCL championship series.

Even with all the players on the team that have made big league trips this year, many more are looking to make that final step. The names and faces might be unfamiliar now (Daniel Descalso? Mark Hamilton? Jim Rapaport? Who???) but they might or might not be unknowns for long. Despite it all, the team is so devoid of talent to outsiders that it took trading a major leaguer in Ryan Ludwick in order to pull in Jake Westbrook for a stretch run that never quite ran the way people thought it would.

…but that’s just what we see on paper!

Fair enough. You should look at how the teams match up this year, right?

Here is the short story: the Cardinals, despite all their superstars and big names, have not made it happen. They get hot for a few games, then trip all over themselves finding new and creative ways to lose. They play reasonably well against winning teams and fall apart against teams that have been making October plans since July.

The Redbirds? They win. None of the players on the roster look like superstars in training. There are really no big-name prospects or sleepers just waiting for the right moment to have their break-out that swings them up to the big leagues for good. Major leaguers? This is possible, but no stars in the making as far as anyone has said. Yet the Redbirds keep winning and winning and winning, to the point that they made it to the PCL championship series for the second year in a row.

What gives? The Cardinals sometimes are unable to buy a pack of gum, much less a win this year, yet the Redbirds, despite having their best players randomly plucked off the roster for weeks and months at a time, snatched victory from the jaws of defeat repeatedly over the course of this season. It makes perfect sense while simultaneously making no sense at all. This is why baseball is played on the field and not on spreadsheets and computers. You never know what will happen, and this tale of two teams is living proof.

3 thoughts on “A Tale Of Two Teams”