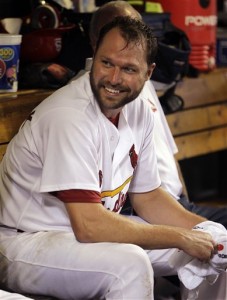 What a disappointing season it has been. One of the most frustrating of recent memory, and I don’t think I’m going out on a limb with that one. The roster has been battered with injuries and sub-par performances seem to be the norm with this team.

There’s no doubt Mozeliak will have his hands full this offseason, as it seems like the more games we play, the more needs we uncover. You know your team’s season is over when you start thinking about what needs to happen in the winter months, but unfortunately the season is over. It’s time to forget about the “mathematical possibilities” and start thinking about what this team is going to look like in 2011.

Jeff Suppan, SP
The only way he gets resigned is if the organization wants to bring him back for roster depth. His career as a starter in St. Louis are, without a doubt, over. Is he coming back? No.

Jake Westbrook, SP
I’m thinking the Cardinals could get him back for $7-9MM per year and I strongly believe they will do their absolute best to bring Jake back. He has proved to be a reliable, innings-eating starter. Is he coming back? Yes.

Brad Penny, SP
Considering his nagging injuries that have never really seemed to go away, Penny has become a very low-cost, veteran starting pitcher. He has said that he wants to resign with the team and that would happen for around $3-5MM per year. Is he coming back? Yes.

Pedro Feliz, 3B
There is no doubt in my mind that this will be his only season wearing a Cardinals uniform. Who knows, maybe it’s his last season all-together. Is he coming back? No.

Aaron Miles, INF
With veterans like Schumaker, Ryan, Lopez, and youngsters like Greene and Descalso, Miles is going to have a hard time fitting in. We all know Tony likes the guy, but it’s about time to get over that crush. Is he coming back? No.

Dennys Reyes, RP
The dude’s getting a little old, and his stats are really starting to inflate. His second half this season has been dreadful. Unless he signs a very cheap contract, I don’t see it happening. Is he coming back? No.

Randy Winn, OF
If LaRussa was making the Front Office decisions (let’s hope he isn’t), then Winn would sign a $60 million contract for the next five years. Is he coming back? No.

Felipe Lopez, INF
He brings instant depth, which is absolutely huge. Lopez has proved that he can handle nearly every position on the field (he even pitched in ’10) and that will really appeal to the club when they decide if they want to resign him for $1-2MM. Is he coming back? Yes.

Jason LaRue, C
This is just a real unfortunate situation for LaRue. Not only is he out for the season with an injury sustained when Johnny Cueto kicked him in the face, Jason is also 36-years-old. Catchers that are approaching 40 fast are not exactly in high-demand. And with the arrival of Bryan Anderson, and Pagnozzi and Hill in the Minors, there really isn’t a need for JLR. Is he coming back? No.

Mike MacDougal, RP
Ha! Well… not much to say here other than nope. Is he coming back? No.

Trevor Miller, RP
Miller’s case is a little different than everybody else. He has an option for 2011, so he can basically come back if he wishes. Now that he is 37-years-old, picking up the option seems extremely logical. Is he coming back? Yes.

Keep in mind that those are my predictions. I’m not holding out on you guys with any inside information, I’m just making simple predictions. If I am correct, we will be losing Jeff Suppan, Pedro Feliz, Aaron Miles, Dennys Reyes, Randy Winn, Jason LaRue, and Mike MacDougal to free agency. That obviously clears up some room on the roster, but here’s a view at what the depth chart looks like if my predictions are, in fact, correct. There obviously cannot be this many people on the roster at one time, I’m just previewing which players could contribute in 2011, and where.

* denotes a Minor Leauge player that could make an appearance in St. Louis

Looking at all of that, I think there are three obvious holes that need to be filled. Third base is a no-brainier. I think it is unanimous that the Cardinals need help at the hot-corner. Freese will most likely be the Opening Day starter, and I have no problem with that, but the guy is way too fragile. It has been a problem throughout all of his career, and it has certainly hurt the team in 2010.

Another glaring weakness is the middle infield. Brendan Ryan, Skip Schumaker, and Felipe Lopez are not going to cut it. Looking back at the disappointing season I think fans are going to realize that the team simply did not have enough talent in the lineup to support a very impressive core. Billy Beane is a personal icon of mine, and I’ll take a page out of his book when I say that on-base percentage is the most important offensive stat. Schumaker, Ryan, and Lopez are the type of speedy infielders that typically have nice OBPs. Schumaker’s is .333 (31 points lower than his ’09 mark), Ryan’s is a horrid .282 (58 points lower than ’09), and Lopez’s is .311 (72 points lower than ’09). Cardinal Nation, I think that is pretty telling.

The only other area that I would like to see improve is right field. I know some of you have a crush on Jon Jay because he came to the big leagues and absolutely raked for a couple months, but if you look at the numbers you will see that he is starting to come back down to earth. In June and July Jay batted .442, which is pretty remarkable. Since then, he has an average of .244. Jon Jay is a very good, athletic outfield that shows a lot of promise. I really like the kid, but I’m not 100% sure we can rely on him as a starter. The Cardinals need to pursue a quality outfielder to platoon with Jay, or I’m afraid we’ll be scrambling at the trade deadline yet again.

Willie Bloomquist, RF/SS/2B, 32 years old
This would definitely be interesting for the I-70 community, as Bloomquist is a former Kansas City Royal. He’s a veteran utility player that any manager would love to have. He has played all outfield and infield positions this season, so he would be able to help out the middle infield and Jon Jay. In Bloomquist’s lost four seasons, he has hit .270 while averaging 15 stolen bases. In 2008, he had a .377 OBP with Seattle.
Projected 2011 Salary: $1-2 million

Mark Ellis, 2B, 33 years old
I am a huge Mark Ellis advocate. If there is such a thing as playing the “Cardinal way”, Mark Ellis will demonstrate that more than anyone. He may be resigned, but the A’s have some young second basemen in there system so I would not be shocked if he’s let go. Ellis is a very good defender who is hitting .274 this season with Oakland. In his career Mark has averaged 14 home runs and 68 RBI (per 162 games), so he does have a little pop. Billy Beane has said that he has not made a decision on Ellis, and that he wants to wait until after the season.
Projected 2011 Salary: $5-7 million

Kaz Matsui, 2B, 34 years old
I know what you are thinking, but this actually isn’t as crazy as it sounds. He’s decent in the field but has had some very good offensive seasons. In 2004-2009 Kaz hit .271 with 57 RBI while stealing 28 bases (per 162). He’s coming off a very bad season in Houston, so he should come at a very low price. He’s your typical high-risk/high-reward type of infielder, but why not take a chance with him?
Projected 2011 Salary: $1-2 million

Cristian Guzman, SS, 32 years old
This past season it seemed like I heard Guzman’s name quite often as a guy that the Cardinals should acquire, so maybe he finally ends up in St. Louis in 2011. Like Matsui, he’s not great in the field, but has proved his worth at the plate. Guzman has led the league in triples three times and is a two-time All Star. Combining the past four seasons he’s hit .296, and in 2007 he had a .380 OBP. Per 162 games, Cristian averages 15 stolen bases and 54 RBI.
Projected 2011 Salary: $4-6 million

Adrian Beltre, 3B, 31 years old
How could I not include this one? Even though I don’t think there is anyway this move is made, I have to take a look at it. The main reason why I do not see this happening is because the organization loves David Freese. They think he is an All-Star caliber third baseman. If they truly believe that, why would they replace him? Not to mention, MLB Trade Rumors says Beltre will likely receive a $50M deal over four years. He’s had a great season and I would love to see him in St. Louis, but I would honestly be shocked to see it happen. Besides, his .342 BABIP this season indicates 2011 could be very disappointing.
Projected 2011 Salary: $11-13 million

Brandon Inge, 3B/C, 33 years old
How many times has Inge been a part of trade rumors involving the Cardinals? Detroit obviously doesn’t want him, and he’s fit into St. Louis perfectly, so what’s the harm? Inge has a pretty good glove and does just fine on offense. He’s having a .252 season with 11 home runs and 63 RBI. In 2006 and 2009 Inge hit 25+ home runs. The problem with Brandon is how often he strikes out.
Projected 2011 Salary: $6-7 million

Brad Hawpe, RF, 31 years old
Usually former Coors Field players make me cringe. If you don’t understand that, check out Carlos Gonzalez’s home and away stats for 2010. It’s a very simple fact that Colorado hitters can be a little overrated thanks to Coors. However, oddly enough, Hawpe’s numbers are that much better at home compared to on the road. In the past four seasons Hawpe has had at least 20 home runs and 80 RBI (including 29/116 in ’07). Even more impressive is his lifetime .373 OBP and two years of a SLG over 900.
Projected 2011 Salary: $4-5 million

One thought on “Potential Free Agent Acquisitions For St. Louis”