Scott Yerbic is still out on vacation, but Matt Wilson has graciously stepped in again from BaseballDigest.com to bring you this week’s Fantasy Report.

The Royals had a tough week getting swept in Minnesota and only winning Saturday against the White Sox. Here is what to look for this week: 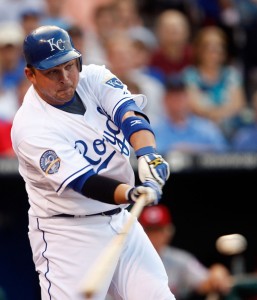 Billy Butler has been battling a bruised right hand for about two months. He aggravated that injury on a hard grounder hit by Dernard Span in the Minnesota series. He missed the game Wednesday and had an off day Thursday but was back in there against the White Sox over the weekend. He appears to be playing through it, so he should be fine going forward this week.

After a shellacking by the Twins this week, Ned Yost has decided to move Brian Bannister to the bullpen. Bruce Chen will retain his spot in the rotation.

Who’s Hot and Who’s Not:

In his last 10 games Alex Gordon has hit .294 with 2 HR and 7 RBI. Patience may really start to pay off with Gordon even though it appears his 15 SB a year potential is now gone. He has progressed in cutting down his strikeouts as his career has continued. He is swinging at fewer pitches outside the zone and making better contact on those pitches he does swing at that are outside the zone. The indicators are that Gordon is still learning. He is now 26, which puts him in his prime for a possible breakout next season.

Technically, we should call Kila Ka’aihue almost hot. But when a guy’s season average sits at .211, it’s good to look at his last 10 to see that he has hit .290, scored 6 runs with a HR and 5 RBI. He is horrible hitting against lefties (.103) and continues to sit against them. Oakland will be throwing back-to-back left-handers but Yost has stated that he will start Ka’ aihue this next week. The rest of the week should be a lock for Kila to get some AB’s going against righties.

Kyle Davies has had two nice starts in a row while working 6 IP and giving up 1 ER in each start. He will look to continue that while facing Cleveland. He is a much better pitcher at home than on the road by more than a full run. In his two starts versus the Indians this season he’s thrown 12 IP with an ERA of 3.65. Davies struggle continues to be his control. He may be worth a flyer if you are in need of a spot starter as the Indians coming into town with a .246-team batting average.

Brayan Pena had a great week on the road and is hitting .412 in his last 10 raising his average from .195 to .252. His zone command has been great as he strikes out only 15% of the time (league average is 20%). Do not expect a lot of power, but he appears to be a bat that w ill not hurt your average going forward.

Mike Aviles has 12 hits in his last 51 at bats (.235) and is sharing time at 2B with Chris Getz. At this point, unless you are scrapping to find some speed, neither is worth owning as they are taking away the other’s contribution to your fantasy roster.

Wilson Betemit had a nice game Saturday in Chicago going 3-4. However, he has been stuck in a worse slump than Aviles going 12-61 (.196). He started out hot this season but has been a steady decline. If you rode him while he was hot, do not be afraid to cut bait (career .265 hitter) and look at someone who is swinging the stick better than him.

The Royals are committed to a long-term look at Sean O’Sullivan. I am not sure why, as he has not shown any real evidence of putting things together since pitching in A ball back in 2007. O’Sullivan is young (23) and it looks like the Royals want to make use of him at the Major League level while he is young. He may sharpen out to be a reliable #4 in his career, but you will want to stay away while he figures out how to pitch at this level.