Scott Yerbic is still out on vacation, but Matt Wilson has graciously stepped in again from BaseballDigest.com to bring you this week’s Fantasy Report.

The year is winding down. If you are wrapping up a playoff run, keep an active eye on your roster and finish strong. Here is a look at the Cardinals this week:

The Cards return home this week where they sport a 43-24 record. The Cubs come into town for the last time this season followed by the San Diego Padres.

Adam Wainwright will be a two-time starter this week. Wainwright is 11-2 at Busch this season with a 1.52 ERA. You are going to start the Cy Young candidate no matter where he pitches but you will want him going this week for sure, especially since he’s snapped the four game losing streak and vowed “to never lose again this year.”

The good news for the Cardinals offense is they are scheduled to face only one lefty starter this week in Cory Luebke. Luebke has had a solid year in the minors with good control. He did not fair so well in his debut against Colorado but did nicely against the Dodgers (6 IP, 7 K).

Who’s Hot and Who’s Not: 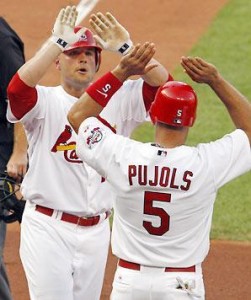 Matt Holliday has gone 12-35 in his last 10 games with 3 HR and 10 RBI. He has received a bad rap at times this year, possibly due to his .263 AVG with runners in scoring position. Yet, Matt has already posted better power numbers than his previous two seasons.

Albert Pujols snapped out of a mini-slump and went 7-23 in Milwaukee and through three games in Atlanta with 2 HR and 6 RBI.

Colby Rasmus exploded Thursday night going 4-4 with 2 HR and 4 RBI. He is playing everyday even though he still struggles against lefties (.255 AVG). He is hitting .407 for the month of September. For what it’s worth, the two teams Rasmus has struggled the most against this season are Chicago and San Diego. They are small sample sizes (25 AB) but in his short career he has only hit .185 (12-65) versus the Cubs. Perhaps they know how to pitch to him.

Kyle McClellan is having a career year as a late inning man this season. He has not surrendered a run in his last 8 appearances and if your league counts holds he has added value. While his strikeout rates are not phenomenal (7.27 K/9) he is posting his best K/BB ratio at a great rate of 2.89. Like any reliever, he is going to hit a bump in the road from time to time but he is also a solid guy who can contribute to your team.

Jon Jay is hitting an empty .233 in the last 30 days. August 11th his average was .372. He now sits at .315. The only upside at this time is that his OBP still is in the .370’s, which translates to run scoring opportunities in front of Pujols and Holliday.

Pedro Feliz is abysmal hitting .222 with the Cardinals and has been pinch hit for late in games. Hopefully your third base situation does not stink so bad that you would have to consider Feliz.

One thought on “Cardinals Fantasy Report”