We feature a guest writer from time to time. This week, I turn to one of the people out in the Cardinals’ blogoshpere that is highly respected and devoted to his craft. He is also on loan from our parent site, BaseballDigest.com for a day.

Hello, I am Daniel Shoptaw. You may know me from such work at C70 At The Bat and Baseball Digest. Bill needed a replacement, so he walked out to the mound and called for the righty. Whether that was the good Ryan Franklin or the bad Ryan Franklin, well, you will have to be the judge.

I suppose, to be a true fan, you should never count out the Cardinals, never say it is over until the x goes up next to Cincinnati in the divisional standings and the y next to whomever wins the wild card. However, when a team goes 3-10 against Pittsburgh, Washington, Houston and Milwaukee, it seems reasonable to start making some wintertime plans.

Even if they pull out some sort of miraculous rally, though, most of the issues of the offseason are going to be the same. This has the potential to be an offseason of turmoil and upheaval or an offseason of more of the same. The following questions have to be asked. Their answers will shape 2011.

The winter revolves around this question. 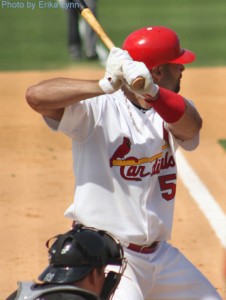 As everyone knows, Pujols’s contract is technically up at the end of the season, though there is an option year for 2011 that the club will pick up as a no-brainer. Albert Pujols will be playing in St. Louis Opening Day, 2011, but the question is, for how long?

Last off-season, there was talk about making it a priority to sign Pujols to a long term contract. While there was a lot of rumor and speculation, it doesn’t appear that the two sides really got down to business and then Pujols announced in Jupiter that, if it was not done before the season, it would have to wait until after. It was not, so it has.

In my mind, you can not wait until next offseason, when Pujols is an actual free agent, to sign him to a deal. It has to be done this winter, for two reasons:

1) You have to know that, if Pujols walks, you are getting something for him. Which means that, without an offseason deal, AP is possibly on the trade market next July. Does anyone really want to go through that? The rumors, the speculations? You thought the Tony La Russa-Colby Rasmus stuff was bad, just imagine a struggling Cardinal team and an unsigned Pujols.

2) Good teams do not go year to year, they plan for an extended length of time. Pujols’s contract situation throws a lot of uncertainty into that planning process. Will he be here? Does the front office need to find a replacement? What kind of money are we going to have? Everything that has been done in the last couple of years has been done with an eye on keeping him. Nothing big can be done this winter unless the Cardinals know that they will.

My opinion is that Pujols stays with the team, signing some sort of creative contract but one that pays him around $25 million a year. I don’t think he tops Alex Rodriguez’s record, because his recent comments during the Rasmus kerfluffle seem to me to indicate a man that really wants to stay here and really wants to win. He is not going to push for every last dollar, especially if they let him in on what that extra money will be used for. I think it would be great if he got some sort of option for ownership when he stopped playing or a 7 year contract with a perpetual option of the sort Tim Wakefield has. While baseball is about winning, it is also about connections, stability, and traditions, and having Pujols in a Cardinal jersey his whole career plays directly into those concepts. 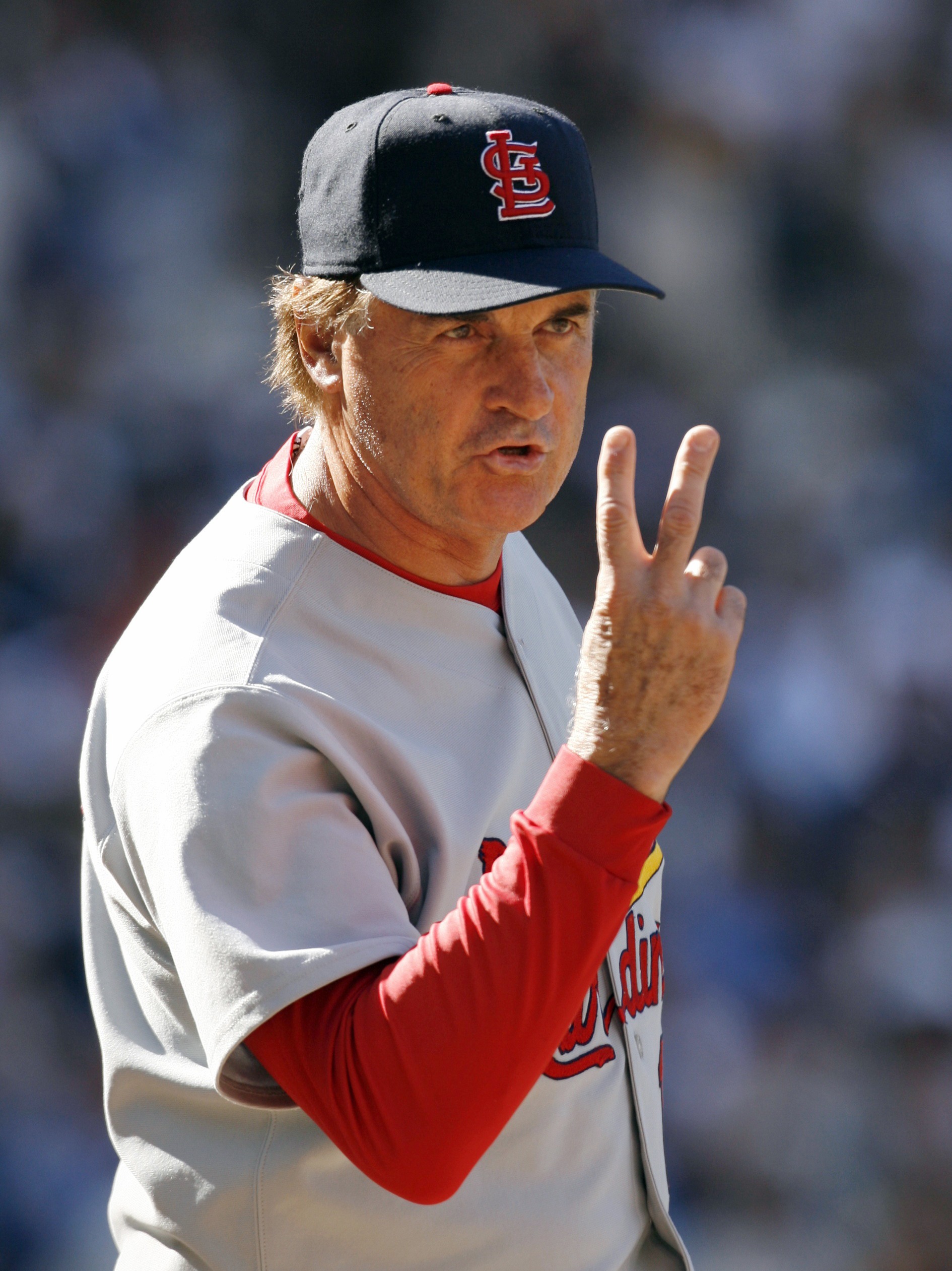 It is not a secret that La Russa and Pujols have a mutual admiration society. Pujols has never known another manager, while La Russa often says that Pujols is the best player he’s ever had the privilege of managing. The two men seem close, as evidenced by the apparently controversial Glenn Beck rally, when La Russa not only introduced Pujols, but was the go-between to get Albert there.

If the Cardinals resign Pujols early in the offseason, or at least give La Russa signs that they are going to be able to do that, TLR may decide to come back for another go-round or two with his favorite player. If TLR walks, Pujols may not be as willing to come back, since he is going to have to deal with a new manager no matter.

The signs are all there, though, for a La Russa retirement at the end of the season. He is on a year-to-year contract. He checked things off his “bucket list” such as getting Mark McGwire back in the game, having Matt Holliday in St. Louis and getting to work with Brad Penny. Assuming he had some influence on the mid-season moves, it looked like he wanted a last attempt with some of his favorites, such as Aaron Miles and Jeff Suppan.

La Russa has said he would always step aside if he thought his message wasn’t resonating in the clubhouse or the players didn’t want him back. With the less-than-inspired baseball this team has played all season and, to some degree, all the way back to 2006, it may be that the hard-nosed, fiercely competitive atmosphere of the clubhouse is wearing on some of the players and not getting the results TLR is used to.

My guess is that he joins Joe Torre, Lou Pinella, and Bobby Cox in the sunset this season, and in five years they have a special “manager induction” to put them all in Cooperstown.

Question 3) What happens to Colby Rasmus?

As the season crumbled around the Cardinals, some of those involved started hurling the bricks.

It boils down to whom you believe and what you take with a grain of salt, but it seems to be that Colby Rasmus, the young centerfielder for the Cardinals, asked for a trade both last year and this year. The relationship with his manager and his irregular playing time seems to have been the cause of the demands.

With that kind of controversy surrounding the gifted youngster, there is no doubt that, if Tony La Russa does decide to return, rumors will swirl all winter about Rasmus being available in the right deal. If La Russa steps down, of course, it tends to put to rest a lot of these topics.

However, the Cardinals can not afford to trade Rasmus, due to the looming Question 1. If Pujols does get significant money from the Redbirds, there is a lot of money wrapped up in him, Holliday, Chris Carpenter and Adam Wainwright. They will need young talent that can produce at a multi-million dollar level while getting paid much less than that. So unless they are able to package Rasmus for a player or two of his quality and salary at a different position, I can’t imagine trade discussions get too far.

According to Joe Strauss, Pujols approached Rasmus in a more positive way after Pujols’s initial public comments. Perhaps the whole thing will help Rasmus grow a little bit and be a little more resilient, even if La Russa returns.

Question 4) Who stays, who goes?

There is no doubt that the 2010 version of the St. Louis Cardinals has been disappointing, to say the least. The problem comes in that there may not be a large amount of difference between them and the 2011 squad.

Of course, players like Brad Penny, Aaron Miles, Jeff Suppan, Pedro Feliz, Mike MacDougal and Randy Winn will not likely be resigned, which for the most part is part of the problem with this year’s team. Dennys Reyes and Felipe Lopez are also free agents, and with their struggles this year they will probably be allowed to leave as well.

Jake Westbrook is a free agent at the end of the season as well. However, unlike some of the other expiring contracts, Westbrook will probably be contacted by the Cards after the season is over. While his record doesn’t reflect it, he has been a solid starter since coming over as part of the three-way trade that sent Ryan Ludwick out of town. If he will return at a reasonable price, the Cards would likely be happy to make that happen.

That still leaves a majority of the team that so underachieved this year. Albert Pujols will be at first, Yadier Molina will be doing the catching, Matt Holliday, Jon Jay and Colby Rasmus will man the outfield barring some strange and major move. Adam Wainwright, Chris Carpenter, Jaime Garcia and Kyle Lohse will take care of the starting rotation, while many of the bullpen arms are of the young and cost-controlled variety, so players like Fernando Salas, Blake Hawksworth, Kyle McClellan and Jason Motte will probably return as well.

The questions for the Cardinals will be whether they can find a free agent or a trade that will upgrade the middle infield. While Brendan Ryan played much better in the second half, especially with his defense, he did not enough to raise his batting average or, more importantly, his on-base percentage out of the doldrums. Second base turned into a bit of a carousel, with Skip Schumaker’s offensive struggles giving other players a chance to play at the keystone as well. He also improved in the second half, but whether it was enough to save his job still remains to be seen.

The middle infield options on the free agent market leave much to be desired. J.J. Hardy has not exactly jump-started his career in Minnesota and there are a lot of former Cardinals (Edgar Renteria (if his option is declined), Julio Lugo, Cesar Izturis) that don’t really need a reunion tour. To upgrade that position, it will either take Tyler Greene being installed at a position and proving he deserves that or a trade with another team.

The problem with a trade is that the chips are limited. The minor leagues are having a stellar season, with most of them making the playoffs. That said, there are not a lot of top-notch, exciting prospects in the organization. Shelby Miller is off limits and the 2010 draftees can’t be moved at all. It is possible, though, to see 2-3 of the second-tier guys sent off for someone like Dan Uggla, whose contract expires after next season.

Third base will also be a question mark. David Freese will likely be considered the top guy, but after his surgeries on both ankles, his health is a significant factor. There has been a lot of talk about Matt Carpenter this season, so it is possible that he could get a shot in spring training to make the team. All in all, though, John Mozeliak is in quite a corner when it comes to revamping this team.

As I said before, this offseason has the potential to blow everything up with a major trade, one that we cannot foresee, or even the signing of Pujols and the retirement of La Russa. Or it could be one where the same pieces come back, including the manager, and the specter of Pujols leaving still hangs over the team. It will be fascinating to see which road is chosen.

3 thoughts on “Looking Toward The Offseason”