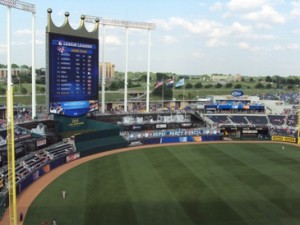 Well, it is that time of the year again Royals fans. Any whim of success left when the Royals booted Trey Hillman out, basically turning to 2011 and beyond with Ned Yost. With only a couple weeks left in the season though this is a perfect time of the year to sneak away to the ‘K’ and catch a few more games before the Royals wrap up 2010. Even though the Royals are not playing for any hardware, it does not mean their opponents are in the same boat. The Royals close the season with two teams battling for playoff berths. Kansas City hosts the Minnesota Twins, who are currently trying to fend off the White Sox, and the Tampa Bay Rays, who are battling the Yankees for the best record in MLB. Strong competition along with the September call-ups will make these intriguing games. Seeing the Royals put up their youth against playoff caliber teams will be a good gauge of their futures within the organization.

One of the most basic things I do as both a journalist and a sports fan in general is constantly try to view things objectively. For example, one thing constantly heard about the Royals is they play better in April and September than any other time of the year, usually because those games are of no relevance. When you actually look at the numbers though, this holds some weight over the past couple years. In 2009, the Royals had a winning percentage of .545 in April and .536 in September. Their next closest month was a .393 clip in May. In 2008, Kansas City went .692 in September. Although those trends have not corresponded with the 2010 year, as their highest winning month was June (.481) and September has been a disaster.

Little things like that get started on talk radio and radiate throughout the minds of baseball fans, reporters, and even front offices. While this circumstance happened to be true, the facts and opinions get pretty jumbled not just on sports talk radio, but national sports media in general. As fans of the game, it is our responsibility to not take everything said on the airwaves or running across the Bottomline on ESPN as completely true. You must keep in mind, those organizations have interests of their own as well. Whether it is a local sports broadcaster needing more listeners so he only says praises about the Royals and Chiefs even though they stink, or ESPN constantly promoting ‘sporting events’ that bring in millions of dollars in revenue for that company (The LeBron debacle comes to mind). It is common knowledge DJs get free services for promos on their shows, but the same company (Disney) at one time owned both ESPN and a major league baseball team (Angels). In 2003, the Angels were sold by the Walt Disney Company to Arte Moreno. Before 2003, though, were all the things said about the Angels on ESPN biased because ownership wanted to avoid conflict within the business? Did ESPN offer more national coverage to the Angels, in a way they could profit even more? I am not saying these things happened; I am simply saying they could have happened which is something needed to be considered by every fan.

With all that being said it brings me to my main point of the article, seeing the Royals prospects play. Sports broadcasters tend to embellish player feats, talents, etc. to make the game seem more spectacular for the people watching and listening. I believe this translates specifically when promoting baseball prospects. It is a simple trap to fall into, because media outlets do everything to make these kids look like future saviors. They rank them within their organization and nationally, they evaluate them, and they showcase them (All Star-Games, Futures Game). There is usually quite a bit of hype surrounding the twenty year old ballplayers. It is easy to put the weight of the organization on the shoulders of some up and comers, especially if your team hasn’t seen success in some time. Like a team not having winning season since George Brett left in 1994. 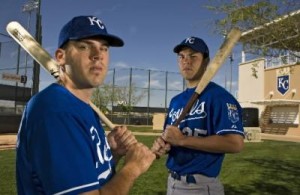 For as many players that have made the dream scenario come true like Jason Heyward, there are hundreds of stories of guys flaming out before they could even contribute on a major league level. Even though they aren’t being showcased yet in Kansas City the names running through the minds of Royals fans as they look toward next year are Mike Moustakas, Eric Hosmer, and Mike Montgomery. All three players were first round draft picks and are expected by many Royals fans to be the future faces of the organization. When looking at these expectations though, my mind goes to the other left handed hitting, first round selection, third baseman billed as ‘the next George Brett.’ Instead of saving the team though, he now roams the outfield of Kauffman while fighting to keep his batting average from dipping below the Mendoza Line. Of course I’m talking about Alex Gordon and it is not to criticize him. Being a long time Huskers fan, it is hard to root against a Big Red alum. Instead, maybe this is his peak performance on a professional level and he should not have been painted as some sort of prodigal child.

When I look at a player, I like to see him play before I make my assessment. You can learn a lot about a player simply by watching them a few times either at the ballpark or on TV. If you can’t watch them in person, the next best thing to do is check out their stats. Statistically the year Mike Moustakas put together is pretty impressive by any measure. Splitting time between AA and AAA he’s amassed 36 dingers, 41 doubles, 124 RBIs, all at a clip of .322/.369/.630. While those are eye-popping numbers, what do they mean? Success at the minor league level does not always translate into MLB prosperity. Usually I like to try and compare young players’ minor league output to current MLB players, to try and create some type of potential career path for them. Comparing Moustakas to a few Royals prospects of the past may give some insight.

While Moustakas’ numbers are better than anyone on the list it might be a bit disheartening for Royals fans to see who most closely reflected his season in past years, Alex Gordon. There are many different factors between the two players, specifically that Gordon went to college and Moustakas has been in professional baseball for four seasons now. This can have a profound difference in his staying power, simply because he is used to the life of a baseball player and has been doing it for four years now. Gordon was rushed through the minors and might not have been comfortable being unveiled so quickly. Gordon was also criticized for his erratic play at the hot corner. Gordon’s career minor league fielding percentage, including his shaky outfield transition, is .950, while Moustakas’ career fielding percentage sits at .942. Since being promoted to Omaha hitting averages have slipped, as well. His batting, on-base, and slugging percentages have all fallen by at least .100 from his AA totals. I am not proclaiming that Moustakas is going to be a bust; instead I am calling on you to make your own opinion. Either way, the statistical comparison is undeniable. These are all things to keep in mind when spring training comes and there will be debates about whether to let the Moose join the big club.

As for the here and now the Royals still have some good talent not named Moustakas or Hosmer trying to show they are worthy of a big league roster spot. Guys like Noel Arguelles, Aaron Crow, Kanekoa Texeira, Lucas May, Kila Ka’aihue, and Jarrod Dyson aren’t necessarily superstar prospects, but they will help fill the holes Kansas City will have over the next few years. With not a lot of experience this is a good opportunity to see what these guys can do in their first few chances as big leaguer. Without a lot of exposure it will be pretty easy to see which of them are over matched, and who is ready to make the next step. Are these guys the future of the team, or will they fizzle out and continue the dismay? Head out to the ‘K’ and do some of your own research of what’s really going on in the Royals farm system.