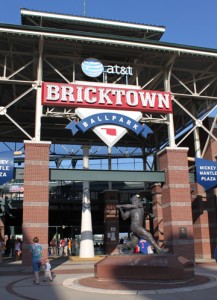 The nondescript black bag held my camera, lenses, a tripod and a notebook. In that notebook was a list of names – baseball players I had never seen before from a team I knew little about. That is where my story begins.

This past Labor Day weekend, I headed to the local Oklahoma City Bricktown Ballpark for my first official photo assignment. I had been to ‘The Brick’ many times before – a beautiful ballpark located in the newly revitalized downtown Oklahoma City, but my previous ballpark experiences there had always been as a fan.

This time was different. I had a media pass and access to the press lounge. I could hop into photo wells alongside the dugouts to get those up-close bench shots shielded from public view. And when the players were stretching and tossing balls before the game, I had the freedom to walk right out onto the field. As a fan who has always been stuck behind the gate, the thrill of experiencing baseball from beyond that jail was hard to contain.

My camera and I are familiar with the first row of seats there at the ballpark, but the chance to roam and get the ‘good’ shots was the stuff my baseball dreams are made of. However this time I was not a fan. This time I had a responsibility. The fact that the team and players I was shooting were unfamiliar made my task easier though. No celebrity shock. No butterflies. These were just guys playing baseball. And for my rookie photography assignment, that setting was perfect.

Rule #1 No cheering from the press box or photo wells.

My editor (who is well aware that my love for baseball and my St. Louis Cardinals runs very deep) may have overdosed on antacids last weekend knowing I was on the loose at a ballpark with player access and roaming privileges, but I can honestly report I conducted myself with utmost professionalism while also having a lot of fun.

Holly McGowen, the ballpark’s wonderful PR director gave me a personal tour of the press area, including the broadcast booth, media lounge and field access points. Off the large central media lounge, there were several doorways – a home team press box, rooms for the television and radio broadcasters, and a private room directly above homeplate for the scouts. At the far end of the hallway in a smaller box for the visiting press, I tracked down Omaha broadcaster Mark Nassar. Mark was unbelievably helpful, passing along daily lineups and Omaha roster information and filling me in on which players were injured and the pitchers I could expect to see over the series. 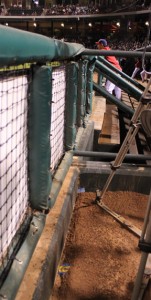 The press lounge was surprisingly spacious and the free dinner buffet looked great – but I didn’t dawdle long enough to eat. Food could come later. I had a media pass burning a hole in my pocket

My first experience in a photo well taught me a valuable lesson. Although I had carefully chosen inconspicuous clothes, avoiding bright colors and team logos, I was unaware that taking pictures would be such a dirty job. Camera wells may provide amazing visibility, but they are also the pit in which the ground crew stores tarps and field equipment after games. There is dirt – lots of it, and I learned quickly that my black pants hate red baseball dirt.

This rule was numero uno on my list during this rookie media voyage for several reasons. First, my underlying goal here was for this to be my first media pass, not my last. Second I have made great strides in convincing family and friends that I do not love baseball solely because ballplayers look great in those uniforms. Third, I wanted to experience baseball differently, to see the business side of it. But most importantly, my husband prefers I not drool on the ballplayers. So I set out with lofty resolve: I was a member of the press – not a fan, not a gal who loves baseball – just one of the guys.

For the first game, that goal was a breeze. This was not my team and these were not my players. The thought of cheering or being star-struck was far from my mind. I was watching pitch counts and field placements, keeping track of previous at bats and trying to time my shots just right. 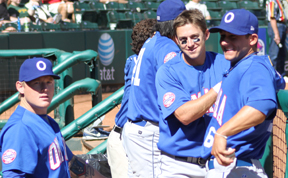 However for the next game, that professional distance started to shrink. It was a laid back day game and the stands were sparse. I set up shop in the photo well on the Omaha side. As the players trickled into the dugout before the game, I checked my list of names for photo targets and caught some great shots. The atmosphere was relaxed and several of the guys joked around and posed for me. They were having fun and personalities were emerging. This game had the promise of great pictures!

As the innings passed, a couple of players would nod or smile as they passed my perch. (My editor would have been proud of me – I nodded professionally and kept my eye in the viewfinder.) But then, an Omaha player came over to the dugout fence and broke the barrier, asking “Can I get you anything? A water?”

It was hot and a ballplayer offered to get me a bottle of water. That answer was a no-brainer.

When that ballplayer-turned-waterboy returned from the clubhouse, he stayed at the fence to chat when the rest of the team took the field. (He was a pitcher, not pitching that day.) In the course of the conversation, I casually mentioned my primary objective from the Royals content editor was getting photos of Mike Moustakas.

Then I joked that Moustakas was making my job difficult by constantly wearing a towel over his head in the dugout. My new pitcher friend was up to the challenge and assured me he could remedy that situation.

Sure enough. When the inning ended, Moustakas was on the dugout steps, striking a pose for me without his towel or his sunglasses. Bingo! 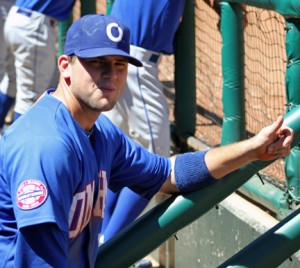 Resistance was futile. That was the day I became a fan of the Omaha Royals. It was bound to happen: learning players and their personalities is my downfall. The dugout shots were fun, and I now had a personal connection with the team. During that afternoon game, those players became more than just names on my target list. I got a dusty high-five from Mike Moustakas and a “see you tomorrow” from my pitcher buddy. How could I not cheer for such a fun group of guys?!

I was sure that for the following game Rule #1 would be very challenging.

On that final day with my rookie media pass, I strolled onto the field before the game – on a mission from my editor to ask Mike Moustakas if i70baseball could contact him later for an interview. When I approached Mike, he smiled, introduced himself (again), shook my hand and when I asked him about the interview he said “sure!” (Success!)

The day continued to be productive, and I did manage (with difficulty) to uphold Rule #1. On a kind tip from a photographer from Baseball America, I found several other prime locations from which to take my pictures. I moved around the ballpark, managing to stay in the shade and capture some incredible shots. The setting was very different as the ballpark was packed for “Kids Run The Bases” day and my pitcher friend was in the bullpen. I watched the final innings of the game, leaning on the rail directly down the fenceline from players in the Royals dugout, expertly maintaining the expression of a casual observer, but inwardly cheering the Royals to their 9-1 victory.

And for you Royals fans, I have to say that your AAA guys get a glowing report card. The team behaved respectably on the field and in the dugout. The boys made every effort to sign autographs for all the children while engaging them in fun conversation. Team spirit was alive and well and big egos were checked at the door and fans were treated with respect. Not to mention, the Royals won 3 out of 4 against a talented playoff-bound Redhawks team.

As an impartial third-party observer during the Omaha/OKC series this weekend, the following are my impressions of the Omaha Royals. No stats or background data to cloud my opinions.

Mike Moustakas – I knew going into this assignment that Moustakas was the big AAA Royals prospect. At first glance he does not have that look about him, but after watching him hit as well as making this one unbelievable leaping catch at third base, I revised that impression. Plus he posed for a picture – and he introduced himself as Mike (twice)! I must admit, I really like this guy!

Irving Falu – Incredibly, Falu seemed to ALWAYS be on the bases. I promised no stats, but I checked and Falu had a really good game on Saturday with 3 hits in 4 plate appearances. No wonder all my pictures of Omaha baserunners that day seemed to have #12 on their jersey! Serious guy. Focused. Good ballplayer!

Cody Clark – The other Royals catcher was called up to the big club prior to this series start, so I was not expecting much from what I assumed to be the Royals backup catcher. However Mr. Clark did a bang-up job behind the plate and he smashed a three run homer in the top of the 9th inning on Sunday.

Jordan Parraz – Jordan did a fantastic job with the kids in the stands. I could not tell who was having more fun with autographs – him or the children. He was another player with great success at the plate plus a home run that ended with great dugout shots!

Honorable mentions go to Jarrod Dyson, Marc Maddox and Kurt Mertins who all played with fire and were fun to watch, as well as my pitcher buddy Brian Anderson who will tell you himself that he thinks he is one handsome fella!

My rookie voyage with photo credentials was certainly a dream come true, and next weekend I get another chance… or should I say I get a new challenge.

The Memphis Redbirds – my team – will meet the Oklahoma City Redhawks in the best-of-5 American Conference Championship playoffs. Games 3 through 5 will be played in Oklahoma City starting on Friday.

Following Rule #1 next weekend may be the hardest thing I ever do.

Erika Lynn writes about the St. Louis Cardinals for i70baseball.com and BaseballDigest.com. You can find her blogging at Cardinal Diamond Diaries or on Twitter at username @Erika4stlcards.

17 thoughts on “The Omaha Challenge”