While trying to find hope that things could still turn around for the Cardinals this season, I think I am instead moving into the first stage of grief: denial. The second stage – anger – is not one I particularly enjoy, so I am trying to skip that one, but this piece might be my way to breeze through that stage and move on to whatever comes next (I believe it is bargaining, but that might go quickly as well with only twenty-nine games left). I need to know right now who to be mad at, but the list is long. Help me out, will you? We can start at the top and work our way down…

Ownership: It almost feels weird to be frustrated with a group that opened their wallets to the tune of $120 million for one Matt Holliday and another $7.5 million for Brad Penny over the winter, but that seems to be exactly where we sit going into the last month of the season. Word spread that there was a bit of flexibility in payroll this year in terms of being able to bring in a big <insert needed item here> at some point in the season, but that big item did not materialize in the way people expected (unless you consider the fact that the team probably saved money by dealing, essentially, Ryan Ludwick for Jake Westbrook).

Considering the fact that this winter negotiations absolutely have to happen with Albert Pujols if the Cardinals plan on keeping him, things could get ugly if the ownership does not plan on adding any salary flexibility in the next year or two, thereby forcing GM John Mozeliak to continue bargain bin shopping to fill out a roster. 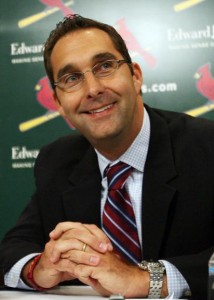 General Manager: Credit where due, Johnny Mo has not had too much to work with as of late. The team was desperate for a starting pitcher and a third baseman, but did not have the payroll flexibility or minor league trade chips to work with, so he settled for acquisitions like Jake Westbrook and Pedro Feliz instead of other various big names that floated about in the rumor mills in the days leading up to and beyond the trade deadline. Obviously Mozeliak had a hand in that payroll flexibility (or lack thereof) issue, creating the deals for Holliday and Kyle Lohse, among others. He should not expect things to get any easier in the coming days either, again considering the Pujols contract, among others.

Minor League Operations: This blame has been years in the making. Things are moving up (in my mind at least), and several of the Cardinals’ affiliates are playing at the top of their respective leagues. The rookie league Johnson City Cardinals are the 2010 Appalachian League champions, the AAA Memphis Redbirds are fighting for their playoff lives as we speak, and several teams in between are finding ways to win as well. It almost seems ludicrous to think that the organization that was ranked eighth last spring fell all the way to twenty-ninth out of thirty in a year’s time, but that is exactly what happens when you trade away several of your most prominent minor leaguers.

How these minor league teams continue to win almost does not make sense to me. If these players are worth so little that no team would take them via trade during the trading deadline, how do they continue to win? Hopefully with what appears to be a strong draft class the system will rebound soon, but for now the pieces were apparently not there to help the big league club, and that is not good.

Manager: Tony LaRussa bashing is at an all-time high right now, and I am getting really close to being completely on board. Did you see the lineup that was run out there against the Cincinnati Reds yesterday? Aaron Miles over Skip Schumaker, Nick Stavinoha over Colby Rasmus, and Pedro Feliz – all in the same lineup? I know it did not help things when the trio combined to go 0-11 on the day with five men left on base, but that lineup is just not fair.

Others have gone on and on about how Tony has chosen to manage this year, so I am choosing not to go into too much detail, but I will say that several of Tony’s choices over the past week have about sent me over the edge, not to mention his affinity for playing time for his pet past-their-prime veterans like Aaron Miles, Jeff Suppan and Randy Winn. Moving on, before I get more frustrated… 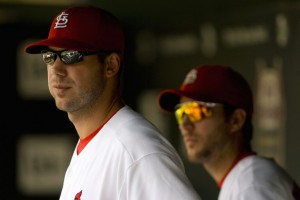 Starting Rotation: It is very difficult to be angry at the starting pitchers. How could you be mad at the stellar three headed monster of Adam Wainwright, Chris Carpenter and Jaime Garcia? If anything, those three should be mad at every player playing behind him for not putting any runs on the board some nights. I could gripe about Jeff Suppan again, but you all already know how I feel about him. Jake Westbrook has been serviceable, Kyle Lohse and Brad Penny injured, and Blake Hawksworth tried his best in the starting rotation, but for the most part, the starters did what they could with what they had.

Bullpen: Again, I struggle with placing blame on the bullpen. Those guys have had to eat a lot of innings not covered by Carpenter and Wainwright starts. For the most part, the relief corps of Jason Motte, Kyle McClellan, Ryan Franklin and others have been lights out, but they have had their fair share of struggles from time to time as well, including a rather insane few days in Colorado that we have all tried our best to forget. For me, the biggest goat in the bullpen this year has been Dennys Reyes, but that might just be my opinion. 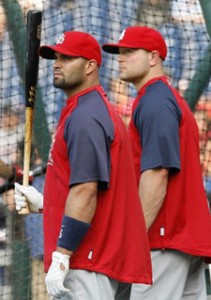 Positions Players: This is the hairiest one for me. Where do you start? At the beginning of the year Matt Holliday was wearing the collar for his poor batting average with runners in scoring position, but he has righted the ship and is sitting right around the .300 batting average/.900 on-base plus slugging percentage, which is good-not-great, but I would be loath to consider him a bust of a signing.

Skip Schumaker, Yadier Molina and Brendan Ryan all had horrendous first halves, and while their numbers still are not stellar, they have been rising a bit throughout the course of the year. You could toss a lot of blame to those three.

Add this to the fact that David Freese met not only the injury bug but all of the bug’s family members as well, and they sent him packing for the year, despite what had been a strong start to a potential Rookie of the Year candidacy.

After that, Pujols has performed around the level we would expect (at least, top five in all the triple crown categories seems like it would be the level anyone would expect), Colby Rasmus has had issues, Ryan Ludwick was playing decently before his trade, and the offense has been shut out 12 times, scored one run 13 times, and two runs 18 times in 132 games. For a team that includes several All-Stars, heavy hitters and Gold Glove worthy players (I forgot to even get in to some defensive struggles the team has faced this year), that simply should not happen.

Bench: The further into the season we went this year, the more reasons I found to dislike the bench. It was an exciting start to the year seeing several of the ‘Baby Birds’ filling roles on the opening day roster. One by one players like Joe Mather, Jon Jay, Allen Craig, Tyler Greene and Fernando Salas started wearing a path in the road from St. Louis to Memphis, and Cardinal fans everywhere shook their heads at the signings of Aaron Miles, Randy Winn, and the trade for Pedro Feliz – known veterans that were brought on to provide relief off the bench.

Felipe Lopez was doing well as a bench player, but over-exposure once Freese went down wore him down to the point where he has been strongly ineffective over the past month plus. Jay has now been inserted into the starting lineup (thankfully), but as a whole, looking at the bench right now, I could replace almost all of them with a player currently playing lights out on the Memphis roster. Not okay.

Fans: I know. Blame the “best fans in baseball”??? How is that possible? They fill the stands every night, know the game better than most, and support the team, even as they spent the last road trip finding every way possible to lose to some of the worst teams in baseball this year. The bullpen especially took note after Friday’s 3-2 win over the Cincinnati Reds that they were not sure what to expect after a 2-8 road trip, but the fans were absolutely incredible.

Or at least, that is what the players see.

Thankfully, most of them probably do not read things like Twitter, various message boards, or angry Facebook statuses. Things have not been so sunny there. Has all of the venom been unfounded? Of course not, but it has not been completely rational either. Baseball makes people do funny things, and one of those things includes, apparently, lashing out when things are not going very well.

The Final Word: Obviously, no one group is to blame for the unfortunate situation the Cardinals find themselves in – eight games out in the NL Central and six games back in the wild card race. As with any team, the blame is rarely placed solely on one individual or small group of people. It is a team effort, and this team could have and should have been better. I am not skipping out on this season until it is over, but at least I can move past the anger phase now!

5 thoughts on “Who To Blame? Passing The Buck On The Cardinals’ Season”