The Cardinals are in the midst of a season that appears to not be heading towards playoff baseball. This leaves the team in a position that it is not accustomed to. It leaves the fan base, the media that covers the team and the players to discuss things that are not normally a focus in the first week of September.

It is a dangerous situation that leaves many in the media over analyzing everything that comes across the television. It leads to cameras wondering why players are snapping at each other, puts focus on a manager that is not under contract the following year, and amplifies already touchy situations like a looming contract for one of the franchise’s most famous players.

Prior to the Sunday competition between the Cardinals and Reds, news broke of confirmation from the manager that there was indeed issues during this season with center fielder Colby Rasmus. It seems Rasmus had requested a trade due to disagreements with his manager, Tony La Russa. In addition, Rasmus had requested a trade during 2009 as well. From there, things began to spiral out of control.

For reasons that I do not begin to understand, Albert Pujols was asked for his opinion on the situation and he replied as any good teammate would, with a simple but firm “love the team or leave the team” type response. The discussions, the quotes, the responses and the statements have been covered by everyone from Fox Sports Midwest to Yahoo Sports to NBC Sports and even Fan House and everyone in between.

The problem I have here is that we are discussing this in any way, shape or form. That responsibility, in my opinion, lies squarely at the feet of the manager. In this instance, the player (Rasmus) that was requesting the trade responded to reporters with various ways of saying “no comment”, keeping it behind closed doors. The manager (La Russa), as he has done in the past, was more than happy to discuss it with the media when asked about the relationship between him and a player.

Multiple times throughout La Russa’s career, and frequently over the last few seasons, it seems the manager has used his ability to talk to the media to get what he wants out of a situation. He is more than happy to ensure that a player that is displeased with his style of managing is exposed and begins to get looked down upon in the media. He makes no secret about the his disagreements with the way management above him builds the team he is to manage. He is openly defiant and seems to get his way by keeping the media involved, getting fans on his side, and ensuring that he will look like the victim at each and every turn when the team makes a decision.

This situation that came about today really has no winners. There were three main people involved in this specific situation and all three of them made it much worse. Let us examine all three: 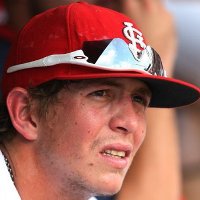 Colby Rasmus
While the situation in the media was handled very well by this young man by refusing comment and not wanting to openly discuss his complaints with management, he is not above some level of blame. After all, this did start with his request to be dealt. Colby has always felt that he should be a run producer that hits in the middle of the lineup and provides power and run production. Do not be diluted by what this means. Colby is a smart kid who will be looking to make large amounts as soon as possible. Power hitters, run producers, and solid bats make more money than number seven hitters and leadoff men. He is attempting to keep his value as high as he can. His time in St. Louis, like him or not, is on notice, but the Cardinals will need to keep him under control as long as possible to continue to be successful.

The Media
It is our duty as members of the media to ask the hard questions, dig deep into the reality of a team and report to the public what we find. However, in my opinion, it makes no sense to feel that a discussion about a manager and a player should be taken to another player, regardless of that person’s stature on the team, to discuss openly. Not to mention, if you intend to quote the player’s reaction to a question you ask and that player’s response seems to be one that is “edgy”, then print your question verbatim. It leaves a lot of speculation over what exactly was said to Pujols to initiate the response that was received. 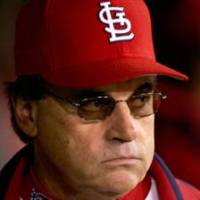 The Hall Of Fame bound manager has been here before. Throwing a player to the wolves when the player has enough respect for you to avoid the questions is borderline irresponsible. Consistently doing this time and time again as well as bringing your disagreements with the teams player development and roster decisions is simply combative and self preservation at its finest. He is quickly putting himself into a position to be able to claim “not my fault” should the situation turn any more sour that what it already has.

All things considered, it seems to me that it is time for Tony La Russa to move on. I am a big fan of Tony’s and I feel that he will most likely find another team in a position to benefit from his leadership in a system built a little closer to his style of managing. I am not the first writer here at I-70 that feels this way. The team will benefit from bringing a manager in to help provide stability and leadership to a team that will be built primarily around youth with cornerstone players in place and the ability to get the most out of that type of makeup. Colby will need to show the willingness to cooperate with the new leadership if he expects to remain in St. Louis for any period of time.

Cardinal fans have not had to deal with a team that is not truly in the hunt for a playoff run in a long time. When the team starts falling apart and the media starts reaching for ideas for columns instead of warm and fuzzy player profiles and dreams of world series championships, things get ugly from time to time. Minor flaws are exposed and exploited. Small disagreements become major arguments and things that are normally kept quiet are brought to light.

The look to the offseason will soon take hold, the team will be discussing additions and subtractions that will improve the team and put together a slightly new look for 2011. The optimism towards our favorite club will return soon. For now, we just have to ride the waves.

5 thoughts on “La Russa And Rasmus: Examining The Situation”