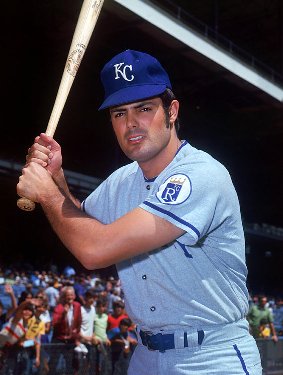 On July 20, 2010, Lou Piniella announced his retirement, effective at the end of the season. The announcement would bring to an end the career of a great manager, a solid player, and a former Rookie Of The Year.

“Sweet Lou”, as he became known, burst onto the major league scene as the starting left fielder and occasional center fielder for the expansion Kansas City Royals in 1969. Piniella would produce a batting average of .282, with 11 home runs and 68 runs batted in. He would only strike out 56 times over 539 plate appearances and post an on base percentage of .325. It was a prototypical season from a player that would become a cornerstone for the young franchise for the first five years of their existence.

It was 1972 when Lou would enjoy his finest of the five years he spent in the Royal blue uniforms of the infant franchise. He would turn in a report card at the end of the season that included a .312 batting average, .356 on base percentage, .441 slugging percentage, 11 home runs and 72 runs batted in. He would be rewarded with an invitation to the mid summer classic, the only All Star appearance he would make as a player.

During the offseason prior to the 1974 season, he would be traded from the Royals to the New York Yankees, where he would play the rest of his playing career. That career would end in 1984 and give way to the career that he would become most known for just two short years later in 1986, in the same town that his playing career ended. Piniella would assume the reigns as manager of the New York Yankees that year, the first of 23 as a manager in Major League Baseball.

His managerial career would take him five cities (New York, Cincinnati, Seattle, Tampa, and Chicago) compiling an impressive resume that included a World Series victory. He would join the Cubs prior to the 2007 campaign and would lead them to consecutive division titles, though the team could not make it to the World Series in either season.

Lou would struggle to find the balance that is required between his personal life and his professional career. He missed three games with the club in the early summer to attend the funeral of his uncle. Most recently, in early August, Piniella took time away to be with his mother in south Florida. He expressed in interviews immediately following that leave of absence that he hoped the situation would improve for his mother and that she would remain as well as she was when returned to the team.

On August 22, 2010, Lou Piniella announced that he would be leaving the team immediately following that game, retiring immediately. He cited personal reasons and a need to return to Florida to his mother.

His career comes to a close with nearly 2,000 wins (1,835), one World Series Championship, and six division titles. He will be remembered as a great manager, a temperamental and vicious competitor, an expansion team’s rookie of the year, and a dedicated family man.

One thought on “Farewell Sweet Lou”