From the webpages of BaseballDigest.com, I bring to you one of my earliest articles for the website. Originally published on March 23, 2009, this quickly became one of the most read and shared articles on the young website, which was not officially live to the public as of yet. It was one of my favorite pieces I ever wrote, and I share it with you, my I-70 readers, on a Cardinal day off in August. It is republished here with permission from BaseballDigest.com and has been edited for current content.

Last season (2008) the St. Louis Cardinals reached an agreement to bring baseball broadcasts back to the NBC affiliate in St. Louis, KSDK Channel 5. They also announced that they would be re-vamping the broadcast teams on TV.

Many people were excited by the prospect of the broadcasts moving back “home” to the local station that aired games previously. Almost immediately the debate in St. Louis began over who would get the nod to call the games. Eventually it was announced that the voice of Cards games on KSDK, Jay Randolph, would return. He would be joined by young broadcaster Rick Horton who would also take over much of the TV work on Fox Sports Midwest. Over the course of 2008 I realized something more than I had in the past…. 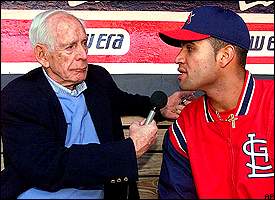 There was a level of class to the game when you listened to Jack. It was personal and professional and amazing. When on the radio, he made you feel like you were there. On television, you felt like he was sitting in the room with you. He single handedly immortalized moments in our minds. There are days, moments, plays, and events that I will never forget. What he made amazing about those moments was that you don’t just remember the vision of that point in time in you life, we have a soundtrack that plays behind it in our minds. There was a certain something to everything that Jack said. There was an emotion behind it like no other. He made you believe.

I think the summer of the home run chase solidified this in my mind. I remember wondering who would be in the booth for the historic home runs. What would any of the announcers have to say? I remember Shannon’s call on 61 “heading for Planet Maris” and feeling that it was very scripted. I remember Joe Buck calling 62 on Fox and feeling like it was a bit bland, with the exception of him reminding Mark to touch first base. But Jack, man Jack had a way of making you say “wow”. Jack’s request to “pardon me while I stand and applaud” was classic, respectful, and that of a pure emotion. It may have been scripted, but it was perfect for the situation.

One of my earliest memories is being told to “Go Crazy” with the rest of St. Louis. I can honestly say that I realized just how special a situation was when I heard Jack say “I can’t believe what I just saw” as Kirk Gibson hobbled around the bases. I remember sitting on 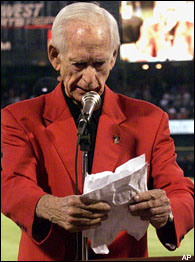 the edge of my seat as baseball returned from the tragedy of 9/11 and listened to Jack as he read his own words.

I know that the announcers for the Cardinals will never come close to what Jack had to offer. This is no slight on their abilities, it is just fact.

So, take a few minutes and remember Jack Buck this spring. Go down to the Yard known as Busch III and stop by his statue. Listen to a few of his famous calls. Sit and reminisce about a true American poet, a classy individual and a respectful man. And, while you’re there….

One thought on “The Sounds Of The Game”