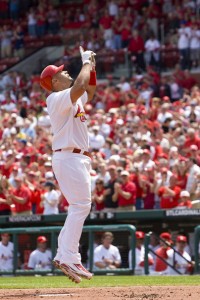 With two outs in the bottom of the first inning, and Ryan Dempster on the mound, Albert Pujols promptly lifted a solo home run over the fence in right center. It was Pujols’ 30th home run of the season and his 396th of his career.

The blast extended his own Major League record of consecutive 30 home run seasons to begin a career. It was Pujols’ tenth straight season of 30 home runs, and I’ll venture to say it won’t be the last.

The Machine is on pace to hit 42 home runs and 120 RBI in what some people have called an “off” year. If his numbers at the end of the season are close to what he is projected for, we could be talking about the first Triple Crown winner since Carl Yastrzemski did it in 1967. Pujols is second in the league in home runs (Adam Dunn – 31), he leads the league in RBI with 86, and is only eight points behind the league leader in average (Carlos Gonzalez – .322).

Regardless of how the season ends and where the three-time MVP finds himself among the league leaders, nobody in the history of the game has ever done what Pujols has been able to do. Not Barry Bonds, not Ken Griffey Jr., not Hank Aaron, not Alex Rodriguez, not Babe Ruth, not Ted Williams, not Jimmie Foxx, not Lou Gehrig. Nobody. He’s as good as it gets and as good of a hitter you will ever see. Have fun building an argument against that, because you simply can’t.

Even Cardinal fans take him for granted. I have been very hesitant to say this, but it is the truth. When Albert Pujols retires, barring a major injury, he will go down as the greatest hitter of all time. People do not understand how good he is, and maybe they never will.

Like the “Beyond Baseball” commercial puts so perfectly, I can’t wait to look back and say, “I saw Albert Pujols do… everything.”