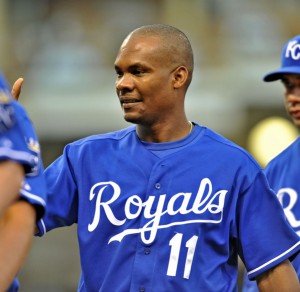 The Kansas City Royals have traded Jose Guillen to the Giants. The trade has long been rumored as the number one possibility and today the rumors became truth. Guillen should be in uniform for the Giants tonight as they start a series with the Padres.

The Royals will get back a player to be named later and will be paying cash to the Giants to offset some of Guillen’s remaining contract. The move comes as a get out of town trade for the Royals. They did not have a place for Guillen in the organization any longer and all trade attempts for any real value had already fallen apart. The Royals get Guillen out of the city and get a few dollars off the books. The move will allow the Royals to let some of their young talent take the field on an everyday basis for the rest of the season.

Guillen overall was a bust in Kansas City making $11 million a season and never really putting up the numbers that were expected of him. Guillen will be joining his 10th team when takes the field for the Giants.

The Giants are getting a little bit of pop added to their lineup for a hopeful late season playoff run and are really not giving up much of anything. The Giants also are not tied to Guillen past this season so any personality problems should not be that big of an issue because Guillen will not be in town long enough to really get on anyone’s nerves.

The deal is a good deal for both teams. Each side was able to get into a place that would seem to make both teams better on paper.

I personally am glad that the drama is over in Kansas City because I was tired of hearing about Guillen.

The early rumors indicate that the Player To Be Named Later in this deal is a player from the Giant’s major league roster that will have to clear waivers before they can send him to Kansas City. Check back here at I-70 Baseball for details as they emerge.

One thought on “Guillen Traded To Giants”