It is true in just about every sport. The fans will second-guess, criticize and belittle the management staff at the helm of the team. Every loss, bad decision, mental lapse and poorly executed maneuver will have the team’s die hard fan base wondering if he has lost his touch. Tony LaRussa, as successful as he has been, is no different. 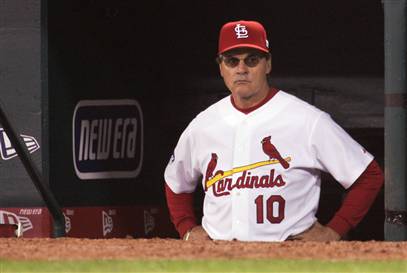 Tony sits in the third spot when you look at all time list of wins for a manger. Though he most likely will not catch Connie Mack before he calls it a career, John McGraw is well within his sites with a few more years left in his gas tank. He has led two different franchises to World Championships. He has coached four players who would win Rookie Of The Year, five Most Valuable Players, three Cy Young Award Winners, and has won three Manager Of The Year Awards (including the very first one in 1983). His strategy is simple, win every series by taking two of every three games and do not worry about winning streaks.

Still, every day fans clamor about his micro managing ways. People criticize when he substitutes a pitcher, pulls a double switch, trusts a veteran over a rookie or plays the odds of every statistic available to him. They sit back the next day and question whether or not the game has passed him by. They wonder if this will be the season that it all ends.

Tony’s contract expires at the end of 2010 and there will be much speculation between now and then on whether he will come back for another year or not. Tony does not like to discuss such things until after the season ends and he has the time to think through the decision without emotions playing a large part. The team has seemingly left him with an open door over the past few seasons, allowing him to decide his own fate and inform them if he wishes to return. The team has shown no interest in making a change until the manager simply does not want to return.

The franchise has made a very conscious decision to focus on a farm system that has been heavily depleted. The management style over the organization has changed to be one that values prospects and youngsters. Tony’s value on veteran ball players does not match up well with this. At times over the last few years, it was obvious that there was a power struggle between upper management and field managers.

This season the team retired the number 24 in honor of Whitey Herzog. Long regarded as one of the top managers to ever lead the Cardinals, Whitey helped the team to three playoff series and one World Championship. Tony LaRussa has led the team to seven playoff appearances and won a championship of his own. He has been instrumental in the arrival of Albert Pujols and Mark McGwire to this city. He has kept this team competitive and helped players like Matt Morris, Chris Carpenter and Adam Wainwright build strong seasons after finding themselves injured and struggling to regain form.

Tony plays the number game, turns away prospects, makes double switches, and makes many fans reach for the Tums as they wish for the best. He can irritate the most loyal fan and yet reward you with situations you did not think were possible. For all the second-guessing, arm chair quarterbacking and demands that fans make for him to be replaced, he will easily go down in history as one of the most successful, determined, and rewarding managers this city has ever seen. He will find his way into the halls of Cooperstown, New York amongst the best ever in the game of baseball. He will leave the Cardinals and head home to his wife and daughters in California or possibly to one more managerial assignment in another town.