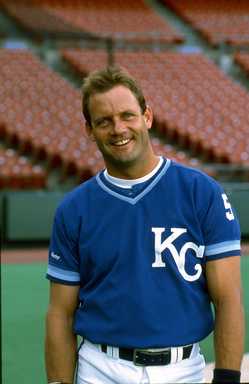 Mike Sweeney was born the same year another Royals fan favorite made his debut. George Brett. Both are from California and both gave the best of their playing years to the town of Kansas City. Both were draft picks out of high school and were expected to be something special for the franchise. Neither one disappointed.

George shot through the minor leagues and made his big league debut in two seasons while Sweeney did it in four. In Sweeney’s defense, he probably would have done it a year sooner if the strike hadn’t shortened the schedule in 1994. He came up as a catcher and would split time behind the plate with Brent Mayne, Mike Macfarlane, Sal Fasano and a few others between 1995 and 1998. In 1999 the Royals were looking for a new first baseman after the mid-season retirement of Jeff King.

Mike Sweeney had been an average player up until that point. His highest single-season average prior to that year came in 1996 (.279). The most games he had played in a single season were 92. He was on the verge of getting traded so he wouldn’t have to compete for playing time. Mike didn’t want to get traded. He loved Kansas City. Mike Sweeney took one of the team. He had been catching nearly his entire baseball life. He decided to learn how to place first base. It wasn’t pretty at first but by the end of the 1999 season he had proven to the Royals and to the rest of the league that he was going to stay in Kansas City. All he did was hit .322 with twenty-two home runs and 102 RBIs. This was the single most productive season a Royal first baseman had had since Kevin Seitzer or George Brett. He even posted a .981 fielding percentage, which is not bad considering he had to learn the position during the season.

He performed equally as well over the next several seasons, earning all-star game appearances in five of the first six seasons in the twenty first century. He played along with now nationally recognized players who have post-season experience and some of them even have the most coveted award in baseball, the World Series ring. Players such as Johnny Damon, Carlos Beltran, Jermaine Dye, Raul Ibanez, even the late Jose Lima had enjoyed playing the game with one of the most likeable guys. Yes, these players at one point and time were Royals and all of them went off to greener pastures.

Yet Mike Sweeney stayed. He felt a great since of loyalty to a franchise and a city that believed in him enough to come watching him play even if his team lost a hundred games in a season. He was named captain of the team for his leadership and play on the field as well as his influence off the field. Unfortunately and fortunately, Mike played the game like it is meant to be played, with every ounce of your being. He played through injuries and began to get frustrated with losing even though he was doing all he could do to help the team win.

At the end of the 2007 season the Royals knew they had seen the last of Mike Sweeney in their club house. He had spent seventeen 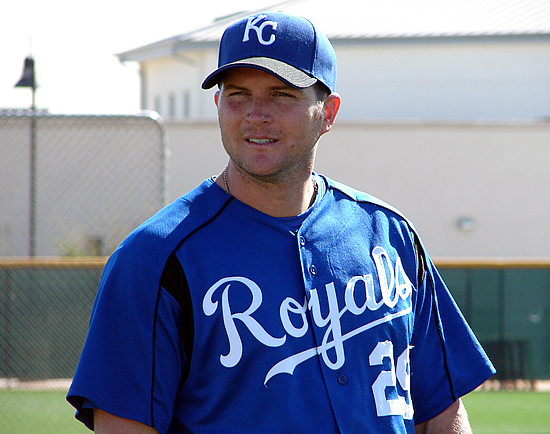 years doing the best he possibly could to help the Royals return to prominence. Unlike some other sports, baseball is not a one man show. He was liked and still well liked by the Royals fan-base in Kansas City. He was given not one, not two, but three standing ovations at his last game as Royal. They never gave him a true shot at a pennant that every good, honest, hard-working, productive player deserves.

After injuries, trades and limited playing time the last two and a half seasons, Mr. Nice Guy Mike is getting his chance. Ryan Howard is hurt for awhile and the Phillies needed a solid first baseman with a decent bat. Mike was never a power hitter like Howard but is right at home playing first base and in the lineup every day of the week.

He’s with a team that has been to the last two consecutive World Series. They are in key position to go to a third. I find it somewhat fitting that he is now wearing number five on his Jersey now. This is a number sacred in Kansas City baseball lore.

This message is for you Mike. I know you’re not much on swearing or any vulgar speech and neither am I. But give ‘em hell. It’s what George would do.

2 thoughts on “He Is Finally Getting What He Deserves”