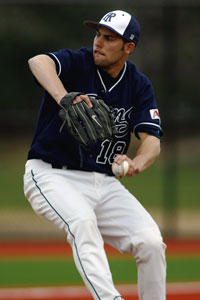 I am a self-proclaimed prospect junkie. I admit it. When it comes to the young, minor league stars, I am a complete nerd. I love watching them progress through the minors and I love projecting how they will fare if they make it onto a big league roster. So, when I heard about the Ryan Ludwick trade on Saturday afternoon, the first thing I did was say, “who in the world is Nick Greenwood?”

The answer to that question, quite honestly, disappointed me. There is not much to get excited about when it comes to Nick Greenwood.

First and foremost, it is never a good sign when you are 22-years-old (almost 23) and are having a hard time in Single-A ball. In 101 innings pitched this season, Greenwood has gone 4-4 with a 4.01 ERA and 69 strikeouts. Last season was not so bad. Coming out of the bullpen for San Diego’s lower-level Single-A club, Greenwood went 4-1 with a 1.71 ERA and 50 strikeouts as a long reliever. He actually made the All-Star team. This year, however, has been nothing like that.

Second, some call him a prospect, but he really isn’t. That may sound harsh but a near-23-year-old having problems in Single-A does not scream “prospect”. Not to me, anyway. A non-Padres scout said, “This was a great deal for San Diego. Kluber (the other minor leaguer that was traded away) is a finge #5 starter, and Greenwood is a non-prospect.” The 14th-round draft pick in 2009 didn’t even make Baseball America’s top-30 Padres prospects list last season. Even with St. Louis, where prospects aren’t exactly bountiful, Greenwood wouldn’t make the top-30 prospects list.

My last complaint about the guy is a very simple one. He does not have good stuff. I won’t sugar-coat it for you. His fastball tops out at 90 miles per hour and usually hovers in the high-80’s. That doesn’t mean he’s automatically doomed, but he’s no Greg Maddux. The rest of his repertoire is highlighted by a decent curveball and an average changeup. Bottom line is that he is a long, long ways off.

Well, the one main thing I like is that he is a lefty. If you combine the A, AA, and AAA rosters, you would have a 44-man pitching staff with only seven left-handers. Also, from the scouting reports that I have read about the guy, he is your classic ground-ball pitcher. In his Cardinals debut with Quad Cities, Greenwood went 2 2/3 innings while allowing three hits, one run, one walk, and striking out two. In his relief appearance, he recorded five of six outs on the ground.

The only way he will be able to survive is if he improves on his stuff while still being above-average when it comes to the variables. Everywhere I look and everything that I read, scouts say that this guy has very good command, control, consistency, and efficiency. When you’re a pitcher and you don’t blow guys away with “stuff”, you have to rely on those four aspects of your game. Greenwood does just that.

The question I have been asking for four days now is, “Greenwood’s the best we could have done?”

When you consider that the asking price for Jake Westbrook was (reportedly) only two prospects, and we gave up an All-Star quality outfielder, don’t you think we could have gotten more than a guy that has “career minor leaguer” written all over him to go along with Westbrook? Looking at what San Diego has in their farm system, two guys catch my eye.

I want to know why the Cardinals couldn’t have gotten one of these guys, or even somebody similar to this. A young, promising pitcher who actually has some potential. I’m not asking for a top-prospect, I’m just saying we could have gotten somebody who has a future in the MLB. Both of the guys are one of the Padres’ top 20 prospects, and I truly think we deserved at least that in exchange for Ludwick.

Am I missing something or was this just another sketchy decision by the St. Louis Cardinals?

Justin Hulsey covers the Cardinals for i70baseball.com and his blog, Cardinals Front Office, that is also dedicated to Cardinal baseball. You may follow him on Twitter @JayHulsey by clicking here.

4 thoughts on “Getting To Know Nick Greenwood”