Let us take a very early look at next year’s roster after the trade deadline deals.

The Cardinals traded Ryan Ludwick to San Diego last Saturday in a three-way deal that brought them Jake Westbrook and minor-league pitcher Nick Greenwood. Ludwick had been a mainstay of the Cardinal outfield since the start of the 2007 season, but the pleasant development of Jon Jay at the major league level left the Cardinals with a surplus of outfielders. Injuries to Kyle Lohse and Brad Penny left them with a lack of major league ready starting pitching.

All this you know. One of the other reasons Ludwick got traded could be cost. Ryan is making $5.45 million (M), is arbitration eligible after this season, and will be a free-agent in 2012. Before Jay came back up and started tearing the cover off the ball, Ludwick probably would have been offered arbitration after this season and, as a Type B free agent, had he declined the Cardinals would have received a compensation pick. It’s an open question whether or not Ludwick would have been offered arbitration based on how this season was playing out. It’s also an open question whether or not Ludwick would have accepted arbitration; recent posts on the St Louis Post-Dispatch website suggest he may have been upset about his playing time. Ludwick denies there was any friction. That said, the Cardinals probably reduced their 2011 payroll by about $6M with the deal.

So what is their total payroll currently for 2011? Before the trade, the Cardinals 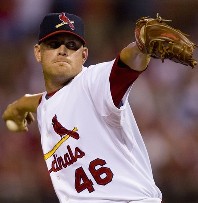 had $67.389M committed already in 2011 salaries. Trever Miller’s $2M option will vest if he appears in 4 of the next 56 games this season, and it’s a foregone conclusion the Cardinals will pick up Albert Pujols’ 2011 option, so raise that total by $13M to $80.389M. Kyle McClellan, Josh Kinney, and Brendan Ryan will be arbitration eligible after this season, and I would expect the club to offer McClellan and Ryan arbitration. Figure those two will sign for about $5M total to play in St Louis next season. Jeff Suppan has a $12.75M option for 2011 with a $2M buyout. I like Jeff, but the Cardinals will buy out his contract.

If we conservatively assume Cardinal payroll will once again hover below $100M, that would leave about $15M to fill out the roster. The good news is most of the roster is already spoken for – 4 of the starters, 5 of seven relievers (assuming Jason Motte and Mitchell Boggs are part of the 2011 team – 6 if you count Blake Hawksworth), the entire everyday lineup, and probably 3 of the bench players (again, assuming Allen Craig, Joe Mather, and Nick Stavinoha are on the 2011 team). That leaves 5 slots to fill.

One will be for a back-up catcher. Jason LaRue is making just under $1M this season to back up, so we add $1M to the total ($86.389M). The Cardinals will probably look for another left-handed reliever if they don’t bring Dennys Reyes back; so we add $2M to the total for that specialist ($88.389M). One veteran bench bat like Randy Winn or Matt Stairs; Stairs signed for $700K, so let’s add $1M to be conservative ($89.389M). That leaves one relief pitcher – and the team can probably promote from within to fill that spot – and one starting pitcher needed.

When Westbrook was acquired, I wondered if the Cardinals would accept the two-month rental, or try and re-sign him to a longer term deal. Westbrook has been a solid major league pitcher in his career, nothing spectacular. By way of example, his 2010 xFIP of 4.30 currently ranks 60th of 106 pitchers ranked on Fangraphs. Decent, not great. Whether or not he could be re-signed would depend both on how his audition goes over the next two months, and what price the Cardinals could get him to sign for. Based on the roster analysis above, St Louis would not offer Westbrook what he is making this year ($11M) to pitch for them next year. Westbrook will have to take a pay cut to stay in Redbird Nation. Although the Cardinals could conceivably offer him up to $10 million to pitch for them in 2011, which would make it a rather small pay cut.

It may seem a bit early to start discussing 2011, especially since the 2010 results are very much in doubt, and some roster changes will no doubt be driven by what transpires over the balance of the season. Fortune, however, favors the prepared.

One thought on “Will The Cardinals Keep Westbrook”