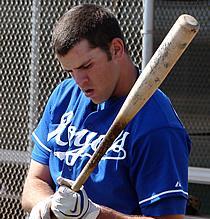 Mike Moustakas was selected in the 1st round (No. 2 overall) of the June 2007 First-Year Player Draft out of Chatsworth (Calif.) High School. He is currently playing third base for the Triple-A Omaha Royals in the Pacific Coast League. He is a big kid (5’11” – 230 lbs) with plenty of power and capable of staying at third base. According to Baseball America, he was rated the fourth best prospect in the Royals minor league system.

Moustakas tore up Double-A pitching. He was the Texas League player of the week twice, Mid-Season All-Star, and participated in the Future Stars Games during All-Star week. It was time for him to move on. There was nothing left for Moustakas to prove. Check out his stats below, they tell it all.

On July 15th, Moustakas was promoted to Triple-A Omaha. At the time of his call-up he was leading the Texas League in home runs and RBI. Since he cruised through Double-A with no problem, the sudden lack of production was a concern. Through 55 at bats he was batting .218 with 10 strikeouts. Moustakas will find a way to turn things around soon. Last weekend series at Memphis, he looked like he has all season. He batted .333 with three home runs and four RBI.

The Royals General Manager Dayton Moore suggests there are no plans on calling up Moustakas in September. The Royals want to give him more time to develop. Since he will not be called up, this tells me he has little chance on making the team next year out of spring training. If Moustakas was in next year’s plan, they would want a preview of what he can do. He will have to give the Royals every reason not to send him down out of spring training. I am positive the Royals are hoping he can be ready and be the opening day starting third baseman in 2011. His only competition is Wilson Betemit and Josh Fields who is currently on the 60 day DL with a hip injury.

If Moustakas doesn’t make the opening day roster, he could be a June call-up. Once he is called up, he will be the

third baseman of the future and should be there to stay. With all the power hitting prospects the Royals have, there could be a slight chance he could get moved to the outfield. I would not be surprised if that happens but with the move of Alex Gordon to the outfield, third base is his to lose.

Side Note: Moustakas turns 22 in September. The average age of baseball rookies to make their major league debut is 24 years old.

2 thoughts on “When Will We See Mike Moustakas”