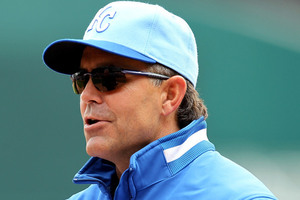 A year can make all the difference. Ned Yost in January was starting his new job as a special adviser to the Kansas City Royals. The month of May came along with a chance to take over for recently fired manager Trey Hillman. The Yost led Royals are 31-37 heading into August with a new lineup after several deadline deals.

The one thing that will not be changing in Kansas City is the manager. Yost has been given a two year extension that will keep him as the captain of this ship through the 2012 season. Yost, it seems, has started to turn this team around during his short run as manager and this small turn around is apparently hope enough for Royals management to bet on Yost for the years to come.

Extending Yost at this point in the season is a good choice, in my opinion. By letting Yost stay, the team is basically giving him the rest of the year to use as an extended training/evaluation period. He will be able to bring up AAA guys and maybe even a AA guy or two in the last month of the season. Yost will be able to see his minor league talent at the major league level and he will also be able to give some bench players more playing time after trading four starting players.

Yost has proven that he can turn a bad team with young talent into a good team previously with the Brewers. This kind of experience is what the Royals need to turn prospects into wins. Yost has been there and done that. He has a game plan that has worked in the past with a minor league system that most will agree was not as talented as the current Royals system.

The most important thing is that Yost likes the process of building a team. This is the most important quality for a manager of a young team because mangers that want to win now want to bring in older talent to make a run this year or trade away all their AAA talent in one deal (see Cardinals). A manager that likes to build a team knows that you have to let the younger players work into being great players. This kind of manager has to be willing to say no to a trade of five top level prospects for one superstar especially with the budget in Kansas City.

A team building manager also has to know that he has time to let his plan come together and that is what the Royals have done by extending Yost. The only problem with this move is that Yost only has two years. I would have liked to see a three or four year deal given to any manager.

2 thoughts on “Yost: The Man We Trust The Most”