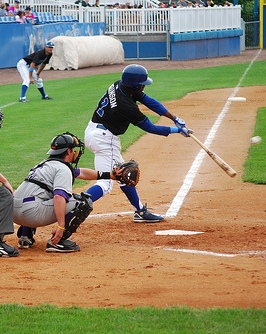 Across Major League Baseball, fans of every team share excitement about their most highly-touted prospects. For the Royals, those players include Mike Moustakas, Aaron Crow, Eric Hosmer and Kila Ka’aihue, to name a few.

But true fans usually have a sleeper prospect, too. If all other prospects fail, fans can say, “At least we still have this guy. And he could be good. Really good.”

For many Kansas City Royals fans, “this guy” is Derrick Robinson.

The 22-year-old center fielder has been floating around the lower ranks of the system for five years, finally making his way to Double-A this season.

Here’s the high-low on Derrick Robinson:

At best, he’s a switch-hitting David DeJesus, but with more speed.

At worst, he’s a switch-hitting Joey Gathright… but with more speed.

That’s right, faster than Gathright. And with better baserunning skills. In fact, many experts say Derrick Robinson is the fastest player in all of professional baseball.

That alone is enough to make Royals fans hopeful. But as we’ve learned in the past, speed alone does not a good baserunner make. Robinson’s stats, though, indicate he’s more than just pure speed. He actually knows what he’s doing on the basepaths.

Over a five-year career in the minors, Robinson has swiped 228 bases, including 42 this season at Northwest Arkansas to lead the Texas League (the No. 2 base stealer in the league has 19).

Although Robinson’s batting numbers have been less than spectacular during his earlier career, he finally seems to have come into his own for the Naturals, with a .303 average and 110 hits, which also leads the Texas League. His .366 on-base percentage could be better, but think about it this way: almost half the time, singles or walks by Robinson are turned into doubles via the stolen base.

Robinson could be on a fast track to the majors. His competition in Triple-A is Jai Miller, who has only five stolen bases and a .238 average this season. However, Miller is more of a power hitter, cranking out eleven home runs in 2010. Robinson has one this season and five in his pro career.

Record to date: 51-46, third place in the PCL American North

The past week: 2-5. The O-Royals’ performance the past few weeks has led them to slip out of first place in the PCL American North.

Transactions: Only one so far this week: Chris Hayes was released by the organization.

Coming up: Omaha is going to cram nine games into the next seven days, including two consecutive doubleheaders at home against Newark to make up for earlier-season rainouts. Then they travel to Nashville to finish the week.

The past week: 5-2, winning three straight against Arkansas

Transactions: Edgar Osuna was activated from the 7-day disabled list; Chris Chavez was placed on the 7-day DL; Eric Hosmer was promoted from A+ Wilmington; and Ernesto Mejia was demoted to Wilmington.

Coming up: The Naturals host Springfield for a five-game series (including a Saturday doubleheader) this weekend, then travel to Tulsa next week.

The past week: 2-4, losing two of three to Myrtle Beach

Coming up: The Rocks are on the road against Kinston this weekend, then they come home to host Potomac for three games and Kinston next weekend.

PITCHER OF THE WEEK

The former No. 1 overall pick has had a fine bounceback season with the O-Royals this year. Although he struggled in three appearances for Kansas City out of the bullpen, he’s amassed a 7-2 record with a 2.84 ERA as a starter for Omaha. Look for Bullington to be back in Kansas City with the September callups as either a bullpen piece or an occasional spot starter.

POSITION PLAYER OF THE WEEK

Ed Lucas’ road to the Major Leagues became a little less crowded this week. Royals starting third baseman Alberto Callaspo was traded to Anaheim. Although the move likely won’t mean a big-league promotion for Lucas, his .423 mark for the week is sure to impress at a critical time. His season numbers (.333 average, 7 home runs, .523 slugging) could earn the 28-year-old a serious look next spring.