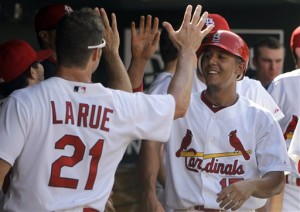 The Cardinals are rolling. Simply put. I think it is safe to say that the team is playing the best baseball that we have seen from them so far in 2010. It sure does feel good, doesn’t it?
For the first time since 2006, the Cardinals won seven in a row. How’s that for foreshadowing, eh?
Our beloved team is finally clicking, and for the first time in a long time, it seems as if we have one of those “good” problems to deal with. What happens when Ryan Ludwick returns?

He has made two rehab starts with Memphis and has hit two home runs. He knocked in three for the Redbirds last night and doubled in his final at-bat. Ludwick told reporters that he expects to be with Memphis for two or three games, which would mean he believes his return could be on the up-coming road trip to Chicago. Who gets sent down when he comes back though? There are a few candidates, but none are deserving of the demotion. The obvious choice is that it will be an outfielder.

With David Freese being out even longer now with his toe injury, the infielder (Tyler Greene) is safe. Dave Duncan does not want an 11-man pitching staff, especially with Garcia, Suppan, and Hawksworth only going five or six innings. So the bullpen is safe. That leaves the outfield. To narrow it down even more, the odd man out is more than likely going to be either Jon Jay, Allen Craig, or Randy Winn. The problem is, neither of those three guys deserve to be sent down or, in Winn’s case, released.

Jay has been one of the team’s best hitters of late, and arguably their hottest hitter. On the year, including his stint with the big league club in May, Jay is hitting .378/.420/.610 with 18 runs scored, 10 doubles, three home runs, and 11 RBI. He’s recently coming off a 12-game hit streak and since his latest promotion, Jay is 18-for-39 (.462) in 14 games with a ridiculous on-base percentage of .533. The more he plays, the better he looks. It’s not just the hitting though, he also has speed that the Cardinals need. Not to mention, he brings a left-handed bat to the table, and the club has been in need of one of those for a long, long time.

As for Craig? He was the guy most people thought would get the boot when Luddy returned. That was until Sunday when Craig had the biggest performance of his career. I guess you could call it his coming out party as the young slugger helped the Cards come back from a four-run deficit to win 5-4 against the Los Angeles Dodgers. His two hits and three RBI, including the ninth inning, two out single that tied the game 4-4, were huge. Then he went out the next night and hit his first Major League home run against Philadelphia. Craig’s been doing this all season though. Maybe not with St. Louis, but he has been crushing the ball. In 65 games with Memphis, Craig has 67 RBI. That pretty much says it all. Just like Jay, there is more to him than his bat. He is very versatile as well, playing both corner OF spots while providing insurance at 1B and 3B.

Then, just when everybody thought Randy Winn was a waste of a roster spot, he turns into Ty Cobb. Since the All-Star Break, Winn is 8-for-16 with two home runs and seven RBI in six games. Plus, we all know how Tony LaRussa is with his veterans. He seems to always go with experience over younger player with more long-term upside. And it just so happens that TLR loves Randy Winn. He plays all of the outfield positions, he has speed, and is a switch hitter. In Tony’s mind, that makes him irreplaceable.

This certainly puts management in a bind. No matter who they decide to ship off, there are going to be critics. I can’t imagine it being Jay. He has done everything the Cardinals have wanted him to do, and then some. I’m a strong believer in putting the most productive players on the field (call me crazy), and Jay is the most productive player of the three discussed.

With that in mind, I believe it’s going to come down to Craig or Winn. Knowing Tony, my guess is that he’ll prefer to keep the vet.

Regardless of which way the front office decides to go, it definitely feels good to have a situation in which your players are too good to part ways with. It doesn’t get much better than that.

Justin Hulsey covers the Cardinals for i70baseball.com and his blog, Cardinals Front Office, that is also dedicated to Cardinal baseball. You may follow him on Twitter @JayHulsey by clicking here.