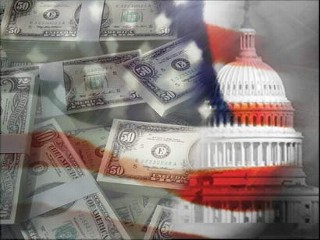 I was watching the news recently, a story about people out protesting the spending by the federal government, and I was struck with a thought: I wonder if the recent worries I’ve been reading on blog posts about the Cardinals and large player salaries could be related.

Perhaps this is a recent phenomenon, brought on by recession-related news in the media, but I don’t recall reading many concerns from fans in the high-living days of 12-figure free-agent salaries handed out to one player after another. Quite the contrary; the calls from fans for their favorite team to nab the cream of the free agent crop were pretty common. The only concern was from fans complaining of an increase in ticket prices as a result of these new signings.

Then there’s the type of players upon owners lavish these salaries. Bill James did a study in the Baseball Abstract more than 20 years ago which demonstrated in the aggregate, a typical player’s performance peak is at or near age 27. Yet most free agents, who are required to put in at least six years’ service, are older than this and are at risk for decline.

The anecdotal evidence for teams such as the Cubs, who signed a number of free agents and extended the contracts of several others in an attempt to end a century-long championship drought, demonstrate the risk both of high salaries and the players they sign. There’s very little the team can do to move Derrek Lee, Aramis Ramirez, Carlos Zambrano, Alfonso Soriano or Kosuke Fukodome, aging players with mediocre numbers and large salaries. A number of other teams, like Houston with Carlos Lee, find themselves in similar predicaments. Spending on these proven veterans crowds out opportunities for emerging young stars, who find themselves blocked at the big-league level, and crowds out opportunity for stretch-drive trades and payroll boosts for a club fighting for a playoff spot.

Which brings me back to the introduction. After years of both quantitative study and anecdotal experience available, fans who otherwise might support a club signing a big-name free agent or providing a multi-million dollar extension over several years have begun to voice their concerns with such risks. Such as concerns federal and state government spending crowds out private sector investment in the marketplace, the concern for these fans is that high salaries paid to players over 30 is unsustainable for a team seeking long-term competitive and financial viability.

Which brings us to Albert Pujols.

Prince Albert turned 30 in January, and the Cardinals may have to consider an annual salary between $25-$30 million 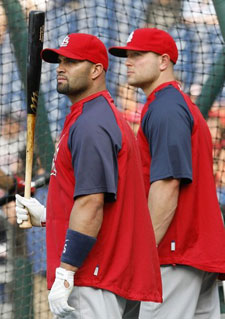 and perhaps an extension of up to seven years to keep him with the Birds on the Bat. Even Joe Strauss of the Post-Dispatch wonders if the club has a better than even chance of signing him to such a lucrative deal, especially after the team obligated so much of its player salary resources for the next seven years to Matt Holliday this past winter.

There is no question the Cardinals want to sign Albert Pujols, and need to sign him. He’s a fan favorite, he’s the face of the franchise, a genuine marketing phenomenon, one of the great men to play the game. His numbers ensure an easy path to enshrinement in Cooperstown five years after he retires.

But those fans who protest spending by the team have a point. Do the Cardinals make an emotional decision to obligate another large share of scarce financial resources to a second player and risk a situation as both distance themselves from that aggregate peak performance age of 27 that the Cubs now face? Or do they make perhaps the wiser fiscal decision to allow Pujols to walk knowing that the club then would be better positioned to capitalize on unknown opportunities in the future?

Like Joe Strauss, I am amazed that a share of Cardinals fans greater than zero actually would entertain either trading Pujols or allowing him to depart. And I wonder to what extent an awareness of financial issues in general thanks to these people out protesting government spending and our current recession has to do with it.

6 thoughts on “Worth The Debate: Pujols Contract”