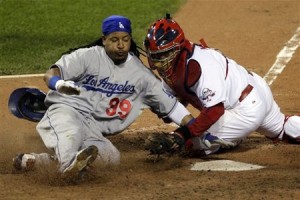 After the three-day layoff, baseball is finally back as the St. Louis Cardinals (47-41) host the Los Angeles Dodgers (49-39) in a four-game set at Busch.
Both teams are in similar positions and are looking to make a playoff push. St. Louis is currently one game behind the surprise Cincinnati Reds, while the Dodgers are two games behind the just-as-surprising San Diego Padres.
This is the second and final meeting of the season between the two teams. The Cardinals traveled to Southern California to take on the Dodgers in early-June but were swept in three games. Being swept by this team is not a new thing though. In the 2009 NLDS, the Cards dropped three straight games in LA before losing the fourth at home. There is no doubt about it, St. Louis has had a tough time against Los Angeles in the past.
The Cardinals have won only four of the last 11 games, but when asked about his second-half prediction was, Adam Wainwright said, “You’ll see a better brand of baseball from the Cardinals. Treading water, that’s exactly what we’ve been doing.”
Pitching Previews
Game One – Thursday, July 15 – 7:15 pm CST
Clayton Kershaw (9-4, 2.96 ERA) vs Chris Carpenter (9-3, 3.29 ERA)
Game one certainly looks like the best pitching matchup. Even though Carpenter is in a bit of a slump (11 ER in previous two starts), he’s seemed to have the Dodgers’ number in his career. In 48 innings pitched, Carp is 5-0 with a 1.88 ERA and 38 strikeouts. Jamey Carroll, with a .375 batting average, is really the only Dodger who has a decent career against Chris. Casey Blake, James Loney, and Reed Johnson are a combined 3-for-28 against Carpenter.

Clayton Kershaw, in a much shorter career than Carpenter’s, has done quite a bit of damage to the Cardinals. In 96 plate appearances against the southpaw, the Cardinals as a team are batting .214 (18-for-84) with no home runs and 27 strikeouts. However, Albert Pujols will certainly be in the lineup (*shocker*), as he is batting .444 with two doubles and five walks in nine at bats against Kershaw.

Game Two – Friday, July 16 – 7:15 pm CST
Chad Billingsley (7-4, 4.14 ERA) vs Jaime Garcia (8-4, 2.17 ERA)
Unlike Carpenter and Kershaw, Jaime Garcia is going to have a much shorter scouting report to go by this week. Garcia has pitched in one relief inning against the Dodgers and has only faced one player on their current roster, Casey Blake. That being said, it would probably be a good idea for Jaime to stick to what he’s been doing. On the year, Garcia has the league’s third-best ERA (2.17) and has a 1.46 ERA in his past two starts.

His opposition on Friday, Chad Billingsley, is 1-2 in five career starts against the Cardinals with a 4.40 ERA. Billingsley will likely Randy Winn tomorrow evening, which is rarely a good thing. Winn is 11-for-25 in his career against Billingsley with five RBI. Believe it or not, Pujols has the worst history of any Cardinal versus the Dodgers starter (2-for-12).

Game Three – Saturday, July 17 – 3:10 pm CST
Hiroki Kuroda (7-7, 3.87 ERA) vs Adam Wainwright (13-5, 2.11 ERA)
Wainwright will take the mound to continue his remarkable season Saturday afternoon. What most people do not realize is that, even though Ubaldo Jimenez and Josh Johnson are having great seasons, Adam Wainwright has had the best statistical season of any pitcher in the Majors and is as hot as ever right now. I think it is important to point out that, even though Wainwright has been fantastic in 2010, James Loney, Russell Martin, Andre Ethier, and Rafael Furcal have a combined .403 lifetime batting average against Waino. As a team, the Dodgers are hitting at a .331 clip when facing the Cardinal ace.

Oddly enough, Kuroda and Billingsley have a very similar history against the Cards. Just like Billingsley, Kuroda has pretty much controlled Albert Pujols, yet he seems to have a very hard time with Randy Winn and Matt Holliday. El Hombre is 1-for-6 against Hiroki while Winn and Holliday are a combined 13-for-33. Aside from those 13 hits from Winn and Holliday, the Cardinal roster has three hits in 34 at bats.

Game Four – Sunday, July 18 – 1:15 pm CST
Vicente Padilla (4-2, 4.04 ERA) vs Jeff Suppan (0-5, 6.55 ERA)
Jeff Suppan has definitely pitched better with the Cardinals than he did with the Milwaukee Brewers, but I think I speak for all fans when I say that he is nothing more than an experiment. Soup has a 4.88 ERA as a Cardinal in 2010, which is better than his 7.84 mark with the Brew-Crew, but he has yet to record a quality start, cannot make it past the sixth inning, and most importantly, hasn’t gotten his first win of the season. In Suppan’s career against Los Angeles, he is 4-4 with a 4.02 ERA.

Vicente Padilla does not have a ton of experience pitching against the Cards (only 22 innings pitched), but there are several Cardinal players who have had a great amount of success against the hot-headed pitcher. Randy Winn (I’ve mentioned him a lot, eh?), Felipe Lopez, and Albert Pujols have a combined batting average of .325 in 35 at bats with six RBI and only two strikeouts. Padilla will be making his fourth start against St. Louis, even while pitching most of his career in the National League.

(all stats are from the past ten games)
Justin Hulsey covers the Cardinals for i70baseball.com and his blog, Cardinals Front Office, that is also dedicated to Cardinal baseball.You may follow him on Twitter @JayHulsey by clicking here.