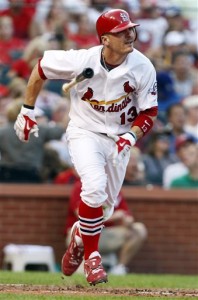 It doesn’t happen very often in St. Louis, but on Saturday night the Cardinals were humiliated. The 12-5 loss may have been the most embarrassing defeat the team has suffered in a very, very long time. As the redbirds walked off the field following a sloppy third inning, they were booed loudly by the home fans. I have never been a fan of booing a team – especially a winning team – but the performance on Saturday was tough to watch and the fans are starting to get restless with struggling players.

While there have been several players go through a rough patch this season, none compare to Brendan Ryan. Yadier Molina has had a hard time at the plate, Holliday isn’t living up to his salary, Schumaker is batting 40 points below what is expected of him, even Albert has been scrutinized, but nearly all patience has been lost for Brendan Ryan. I believe his little act on Saturday night was the final straw.

It is one thing when you cannot hit the baseball. It is an entirely different thing to not have your head in the game. There is absolutely no excuse for that. Brendan Ryan was all over the place in that 12-5 rout by the Brewers. He was throwing to the wrong base and dropping relay throws from the outfield. Then, there is his side-arm throw he picked up somewhere along the line that has zero accuracy. On one play, Ryan threw home to get the runner (who had basically already scored) and the ball was ten feet off target.

I wouldn’t mind it as much if he just wasn’t able to hit, but when you take that into the field? That’s when the plug needs to be pulled. Defensive lapses cannot be tolerated.

It is time to “put up or shut up” for the Cardinals shortstop. The fanbase has always supported Ryan. He is an extremely likeable guy and I think everybody has been extra-patient with him this season. The fact of the matter is, Brendan is hurting the team. Unfortunately, there is not much management can do with Ryan except sit him on the bench. He has little if any trade value, and if we tried sending him to Memphis he would be picked up off of waivers. Do we really want to get rid of him all together?

This isn’t anything new either. Ryan’s stuggles go way past the Milwaukee game. He is currently riding a 4-for-40 skid. During that slump, he has scored twice. Keep in mind that he was playing nearly every day. Ryan also hasn’t batted in a run since June 19th; almost three weeks ago.

Brendan is coming off of a great defensive year, and even batted .292, but all signs of that player have disappeared. His average this season has dipped below the Mendoza-line (.198) and his on-base percentage is at .267. His BABIP (batting average of balls put in play) is 67 points lower than his career mark and he is striking out more this year than he ever has. His ground ball rate has jumped 6%, his fly ball percentage has done the exact same thing, and line drives have become scarce.

So who’s going to be our shortstop? Enter Tyler Greene.

“It’s a good time to give him (Ryan) a break and give Tyler a chance to play. Whoever plays the best, plays the most,” said Tony LaRussa following the decision to start Greene at SS on Sunday.

Greene was the Cardinals’ first round pick in 2005 and has carried the “prospect” tag with him all the way through the Minors. In two full seasons with the AAA-Memphis Redbirds, Greene has hit just below .300. This year, Greene is batting .291/.362/.465 with seven home runs, 52 runs, and ten stolen bases in only 62 games.

The 26-year-old infielder had a disappointing stint with the big league club in 2009 but has yet to disappoint so far this year. Through his first three games since the recent call-up, Greene is 3-for-9 with two runs, a triple, a home run, and four RBI. I know it is a very small sample size (35 at bats), but his .514 slugging percentage is awfully impressive as well.

The Tyler Greene experiment may go down as just that. An experiment. You never really know. The only thing certain is that Brendan Ryan hurts the team’s chances, and so far Greene does not.

Don’t look now folks, but for the first time in his MLB career, Tyler Greene has a job that is his to lose.

One thought on “The Final Straw For A Beloved Cardinal”