It feels good to be a Royals fan again, doesn’t it? Having been through perhaps the worst stretch ever in Royals history, it seems things are beginning to improve on both sides of the ball at the right time. The Royals are actually still in the hunt sitting about a week out of first place.

The last time these two teams met, June 28-30, the boys in blue cooled off the White Sox’s surge by winning the series two games to one. Since then, both teams have been roughing up Western division opponents heading into the series. The Royals bats have continued their hot streak by solid pitching and having the best hitting team in the Majors. 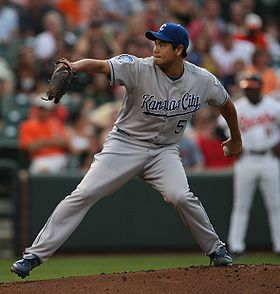 by going 7.1 innings while only giving up 2 hits and 1 earned run. After that game his ERA stands at a 3.51 for the season which is a half run better than the staff’s ace Zack Greinke. His only prior appearance against the White Sox this season however was not as strong going only .2 of an inning and issuing two walks in a 9-2 loss back on May 5th. Since that appearance, this left hander has brought consistency to the Royals pitching staff and look for another solid performance. Going into this game, opponents are batting a measly .202 against him.

Mark Buehrle was not as impressive in his last start, going seven innings for the win but gave up five hits, including two home runs in the White Sox win against the Rangers. He has been hit-and-miss all season for the White Sox with a record of 7-7. He is 0-2 against the Royals giving up 18 hits, and 9 earned runs for an ERA of 6.69. If the Royals can get to him early like they did in his previous starts, it will be another long day for Buehrle. The Royals are batting .367 against him. 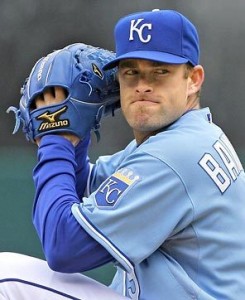 Anthony Lerew, 1-2, was scheduled to start but this start was given to Brian Bannister who is the current wins leader among the Royals starters. Lerew would like to continue his success against the White Sox that he had against them on June 28 but it will have to wait until after the all-star break. His win against the White Sox was very important to him as a pitcher because it was his first win as a major leaguer. He scattered three hits and only one earned run in a six inning gem. However, Manger Yost made this change despite Bannister’s struggles with against the White Sox. He (Yost) sited that the day off on Thursday will give Bannister his allotted amount of rest and that he had talked it over with Bannister before announcing this decision.
Bannister’s ERA against the White Sox is an atrocious 9.69 in his three starts this season. His best performance was a six inning performance on May 16th at home. The White Sox have hit Bannister hard and often this season with a .386 average going into this weekend series.

Gavin Floyd (4-7) has had faced the Royals three times so far this season and so far the Royals have had the better of him. He is currently 1-2 with a 6.15 ERA in his three starts against the Royals. In his last two starts (one against the Royals); he has 13.2 innings and only given up 3 earned runs. The Royals are batting .361 against him. 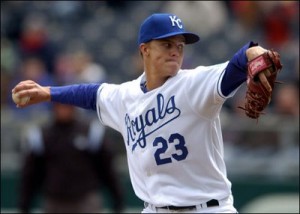 Greinke started off the season with little if any run support at all in his first ten starts. Despite the rocky start, he was seemed to have found his stride by notching his third consecutive victory against the Mariners Tuesday night. Greinke is 5-8 and Peavy is currently sitting at 7-6. Both of these pitchers want to go into the all-star break with another win under their belts. Zack did earn the victory in his only one start against the White Sox this year despite giving up ten hits and six earned runs on June 30.
Peavy has been consistent enough to notch a 2-1 record against the boys in blue with an ERA of 2.98. The Royals have batted only .228 against him so far this season. Peavy may be replaced depending upon the diagnosis of his arm injury that he sustained Tuesday against the Angels.

Both teams want to establish momentum heading into the second half. Which ever team captures the momentum in this series, watch out AL Central. In the season series the White Sox are batting .254 with 17 extra base hits while the Royals are batting .313 with 19 extra base hits.

Offense: Royals have without question the better team offense. They are the best team in baseball right now in several offensive categories including batting average.

Pitching: If we go by the team numbers the White Sox have the Royals beat. However, if you look at the pitching match ups and the way the probable starters have performed recently, it will be an even match up this weekend in Chicago.

X-factor: Royals have been hitting the baseball better than any team in baseball, both at home and on the road. However, one of their key players in their offense, Jose Guillen, came up limp in the eighth inning Tuesday. He currently leads the Royals in home runs and RBIs. The White Sox’s best pitcher is also hurt as well. Good pitching beats good hitting any day of the week. With this recent news in mind, I give the Royals a slight edge going into this weekend before the break.