Following back to back debacles in Denver, the Cardinals limp into Houston for the first time in 2010. St Louis lost four of six games in Texas in 2009.

turmoil for the Cardinals. As the offense struggles, the bullpen begins to take on water, and the starters get injured, Wainwright keeps rolling along. Since lasting only 4 innings against Toronto on 24 June, Adam has allowed one earned run in his next 2 starts covering 15.1 innings. He’s struck 16 along the way, and currently leads the NL with 123 strikeouts.

Lance Berkman has two home runs off Wainwright in his career; he’s also struck out 9 times against the Wagonmaker. Hunter Pence leads all current Astros with 9 hits in 29 plate appearances.

Bud Norris hasn’t been very good against the league (0-5, 7.80 ERA), but he’s been downright scintillating against St Louis (2-0, 0.00 ERA). He’s never lost to the Cardinals, allowing 1 ER in 26 innings pitched over two years. He’s only faced the Cardinals once in Houston and he went 6 scoreless for the win. Norris throws a fastball that averages 93 MPH, but his money pitch is a slider which he throws about 40% of the time.

As you might expect, most of the Cardinal hitters have studies in futility as career stats versus Norris. Yadier Molina has had the most luck, 4 singles and a walk in 10 PA’s. The Cardinals have two extra base hits total off Norris in 74 PA, one double each for Albert Pujols and Matt Holliday.

He hasn’t pitched badly, but he hasn’t pitched really well either. Jeff threw two scoreless innings against Houston, in relief for Milwaukee, on May 26th, allowing only 2 hits. Suppan has made 16 career starts against the Astros, the last a win on 19 September 09. He is 3-7 career against them. Jeff’s last start in Houston was last May 21; he worked into the sixth, allowed 3 runs, and came away with a no decision.

Brett Myers has faced the Cardinals twice this year. He allowed 1 ER over seven innings and lost to Brad Penny on 14 April, then gave up 2 ER over 6 innings and beat Penny on May 11. Myers has 13 career starts against St Louis and one complete game. He gives up a lot of baserunners (1.5 per inning) and has served up 11 Cardinal home runs in 79 innings, although all those HR were while Myers was a Phillie. He has not faced the Cardinals in Houston in his career.

Myers fastball sits in the high 80s/low 90s and he throws it about 45% of the time. His best pitches are his slider (30% of his pitches) and curveball (20%). He also has a decent change up, but throws it infrequently.

Skip Schumaker, Holliday, and Pujols all have 2 career HR against Myers. Holliday also holds a team high 1.408 OPS versus Myers. Of all the regulars, and despite having homered against him, Molina has struggled the most (.565 OPS). 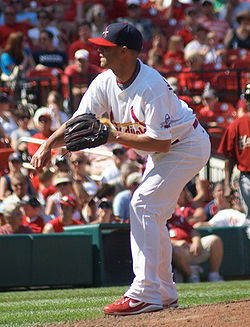 rotation due to the injuries to Kyle Lohse and Penny. He’s made 4 previous starts in 2010, and after a shaky first start in Los Angeles he’s pitched fairly well (16 innings, 3.38 ERA, 13 K, WHIP a little high at 1.375). Being a groundball pitcher will serve him well in Minute Maid Park, with it’s short porches in left and right field. Hawksworth has made four relief appearances against Houston and thrown four scoreless innings. In fact, he’s allowed only 3 base runners (1 hit and 2 walks).

So he’s got that going for him, which is nice.

With only 4 innings pitched against Houston, even the small sample size of at bats by their hitters is too small to go over.

Rodriguez emerged at age 29 as one of the better pitchers in the National League, and the clear #2 behind Roy Oswalt. Wandy has had a tough 2010 season. He’s also pitched in tough luck; the Astros scored 18 runs total in his 10 losses, with six of those runs coming in one game (at Cincinnati on 28 May). He’s faced the Cardinals twice this season, losing 5-0 to Wainwright on April 12, and beating Lohse 9-6 on May 12. Rodriguez is only 4-10 career against St Louis in 16 career starts, and 2-6 in Houston. His last start in Houston against the Cardinals was last 21 September; he gave up 6 runs and lost.

Rodriguez’s fastball and curveball were real weapons for him last year, but so far this year they haven’t been, which may also account for his struggles on the mound.

You probably know about Pujols’ struggles against him, although AP did homer off Rodriguez in the 12 April game. Holliday has had good success against him too (1.056 OPS, 2 HR). Molina has a .492 OPS, Brendan Ryan .348, and Colby Rasmus doesn’t have a hit off him in 10 PA (1 walk).

St Louis: Ryan Ludwick and David Freese are on the 15-day DL and most likely won’t return until after the All-Star Break. Freese is projected to be back for the Dodger series starting 15 July; no return date has been set for Ludwick. Penny and Lohse continue to try and rehab their way back into the rotation. Spot starter and long man Adam Ottavino went on the 15-day DL today with a shoulder injury, and should miss the rest of the month.

Houston: The Astros also have 5 players on the DL, and none of them are expected back for this series. Pitchers Felipe Paulino (shoulder), Brian Moehler (groin), and Jeff Fulchino (elbow) are out until mid-July, mid-July, and early August respectively. Third baseman Geoff Blum (elbow) and Tommy Manzella (finger) are out until August.

The Astros seem to be starting to heat up, and the Cardinals are really struggling right now. St Louis is 40-44 against the Astros since they left the Astrodome, but past performance is no guarantee of future success. Given their relative places in the standings St Louis should win 2 of 3, however, losing 2 of 3 or getting swept isn’t beyond the realm of possibility. We’ll predict the Cardinals win 2 of the 3 and hope for the best.