The All-Star game gives a chance for baseball’s best players to get together on one field and showcase their talent. This year, the Cardinals are sending five players to the All-Star game: Albert Pujols, Yadier Molina, Adam Wainwright, Chris Carpenter, and Matt Holliday. All of these players have had very different first halves this year, ranging anywhere from completely dominant to slightly disappointing. Let’s take a look and see what we can find… 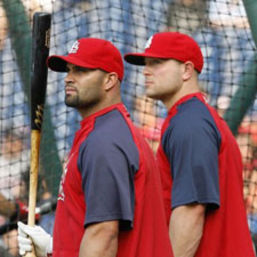 Albert Pujols: This will be Albert’s ninth appearance in the All-Star game in only ten seasons. So far this season he’s hitting a solid .305/.413/.567 (batting, on base, slugging), which is actually low for him when looking at his numbers spread out over his career. His average line for the first half is .325/.422/.617. I would in fact venture to say that these are the lowest his numbers have been at the midway point in the last five years. That’s on the surface. Digging in a little deeper, with runners on base, Albert is hitting .341/.482/.611. That looks significantly more like numbers we are used to seeing. Pull down another level – batting with runners in scoring position. Here we see a slash line of .356/.533/.630, and you can attach 26 hits in 73 at bats to those numbers, as well as tacking on 31 walks. This man really is a machine.

As far as the second half goes, things are actually looking up in terms of what we can hope to see for our MVP first baseman. His two best months over the course of his career are August and September, and overall he has averaged a line of .342/.432/.634 for the second half. Now, Albert has already declined to participate in the Home Run Derby, and after being the face of St. Louis during last year’s break, having his only responsibility being the actual playing in the game might be a welcome relief for him.

Yadier Molina: This is Yadi’s second appearance in six full seasons. He is having a rough year at the plate, however his line of .229/.309/.302 is deceiving, as Yadi has hit into some bad luck. Many have pointed out that he is making solid contact at the plate, but hitting it right at people. His June and July numbers do, however, show a rather prolonged slump. Like Albert, Yadi is coming up much better when batting with runners in scoring position, putting up a much more respectable .265/.370.426 line.

For his career, Yadi doesn’t do a lot of up and down as the season goes on. There is the slightest increase from his first to second half numbers, so slight it’s hardly worth mentioning. Month by month, nothing much changes, with exception to starting slowly in April, then staying on an even keel from May through the end of the season. I expect that some of those hits that have been finding gloves will eventually start finding holes again, and we will see a more consistent hitter to go along with Yadi’s Gold Glove defense in the second half.

Adam Wainwright: This is Adam’s first appearance in five full seasons (four as a starter). Literally every statistic you look at will tell you that this is his best year yet, and last year he was third for the Cy Young award! His ERA of 2.24 is third in the NL, he has four complete games, is second in innings pitched, first in strikeouts, and is giving up fewer hits and walks than in years past. That’s impressive!

Are you ready for the best news? Things get better for Adam in the second half! His ERA goes down, his walk rate goes down, and his strikeouts go up. That’s including the fact that his best first half ever is padding the first half numbers tremendously! This is the first one that really surprised me, because I was not prepared to think that his first half numbers would get any better in the second half. It is going to be an absolute dog fight for the Cy Young this season, and it would be a mistake to think that Adam’s name will not be near the top of the list. 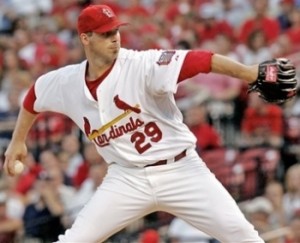 Chris Carpenter: This is Chris’ third appearance in thirteen full seasons. What a deceptive sentence. It is very difficult to look at his career statistics and not cringe, thinking ‘What if?’ It is not easy even trying to compare his career statistics, since he was a very different pitcher in his years with Toronto. What I will say is that in his healthy years in St. Louis, this is a slightly abnormal year. His home run rate is very obviously up (1.1 HR per 9 innings), as are his ERA (3.16) and walks (2.7 per 9). Another number that is elevated is his strikeout rate. This is the highest his strikeout rate has been since his Cy Young winning 2005 season, but the similarities between the two seasons start and end there.

Make no mistake – Chris Carpenter is still having a good year. However, due to his sporadic history, I am struggling to come up with a solid comparison on first and second half statistics. Looking at things year by year did not help either, as his second half in 2009 was better, but his first half in both 2005 and 2006 was the stronger half. For Chris, the safest thing to say might be that as long as he stays healthy, things should look at least as good in the second half as they were in the first.

Matt Holliday: This is Matt’s fourth appearance in seven seasons. A lot has been made of his ‘slow’ start this season. Whether Matt is feeling pressure due to the fact that he signed a record contract with the Cardinals over the winter, he has hit into some bad luck, of he is just having a bad year, it is probably one of the most talked about ‘issues’ of the first half for the team. Truth be told, Matt’s .326 batting average on balls in play is the lowest this year than it has been at any other point in his career. If that corrects itself, his .298/.374/.493 line will move more towards the mean as well.

Do not live under the assumption that Matt Holliday is a second half player, because the splits do not agree with that. It looks more like Matt gets consistently better throughout the months of April through July. He has been getting better this season, while his numbers are still under the ‘normal’ range for Matt by far. Look for things to keep improving as the year goes on, due to the weather continuing to warm up and his continuing to become more comfortable in the grass of Busch.

If I had to make the call, I would say that between the pitchers and hitters listed here, it is more important for the hitters to step up in the second half. It would be ridiculous to ask too much more of either Wainwright or Carpenter to do more than they already have been doing this season. They have both gone out and very rarely left the game without giving the team a strong chance to win. Thinking about how many games the Cardinals have been shut out of this year by pitchers that are getting ripped to shreds by the rest of the league (Looking at you Bud Norris. You started this.), my head starts to hurt. Your ace pitchers should not lose games with 1-0 scores.

I mentioned this on Baseball Digest on Tuesday, but the team has been hit with the injury bug. Combine this with the fact that our hitters have failed to all figure out how to hit at the same time, and things should eventually get better. It will depend on how the bats respond to the heat to see if the Cardinals push for the NL Central crown this year.

3 thoughts on “All-Stars At The All-Star Break”