We feel fairly confident in our ability to talk Cardinal baseball here at Cardinal Diamond Diaries. We even know a bit about the minor leagues. However, we are not about to pretend to know anything about the MLB draft that concluded yesterday. That would be ridiculous.


If you are looking for real draft coverage, we recommend www.futureredbirds.net. Those boys know the draft. We’ll even make it easy and link to their 2010 draft information. Just click on each player’s name to learn all the goodies we would not even pretend to know.


What we do know is pictures!  So for our own special touch in covering the draft, we have collected that vital piece of information missing from most draft reviews: pictures of the Cardinals’ draft picks – limiting it to the first 12 rounds due to space and attention span.

What we know: He plays 3B for Arkansas, who are still competing in the College World Series. He is hitting .427 with 64 runs, 9 home runs, 48 RBI, and a .603 slugging %. That’s real good.
What we think: Ang thinks he looks kinda goofy. Erika disagrees. This should be a fun project! Round 1 sandwich pick (46 overall) – Seth Blair
What we know: He’s a right handed pitcher from Arizona State – also still playing in the CWS. He’s got a lot of pitches, but only 3(ish) of them look usable in the majors, so he might wind up a reliever.
What we think: Get a haircut, son.

Round 1 sandwich pick (50 overall) – Tyrell Jenkins
What we know: Tyrell is a high school kid out of Texas. He’s a 3 sport athlete committed to Baylor to pitch and play QB. He ran a 49 second 400 meters this year – without training. That’s nuts.
What we think: You waaaant to plaaaaay for the Cardinals, baby face.

Round 2 (75 overall) – Matthew (Jordan) Swagerty
What we know: He goes by Jordan, so that’s what we will call him. Jordan is a pitcher who moonlights as a catcher. He’s got 3 solid pitches and good command, which are very nice qualities. He’s also holding down a 2.05 ERA with 14 saves in 32 relief appearances.
What we think: He’s a cutie, but has the nose of someone who’s been punched in the face… or had it broken (Ang – been there).

Round 3 (106 overall) – Samuel Tuivailala
What we know: He’s a shortstop out of California who was also the ace of his high school pitching staff, as well as the quarterback and the point guard (show off). He’s committed to Fresno State, where they had planned to use him both for his bat and for his arm.
What we think: Samuel was drafted as a middle infielder, but he is neither small nor scrappy. Tony wouldn’t know what to do with him. Also, do you really think Mike Shannon could pronounce that last name? Not a chance. Round 4 (139 overall) – Cody Stanley
What we know: He’s a catcher out of UNC-Willmington who led the CAA with 22 runners caught stealing. Everything we read uses the word ‘solid’ from his batting to his defense.
What we think: This is the first #chickcomment** worthy pick we’ve seen so far! Solid looks indeed! Definitely “one to watch!”
**editor’s note: #chickcomment: (def). n. of or pertaining to the use of descriptive terms, generally by females, to describe or quantify the level of hotness or the cute-ability factor of a given subject/male.”

Round 5 (169 overall) – Nicholas Longmire
What we know: Not much, really. Reactions are mixed. Some project him to be a raw power outfielder and okay at everything else, others see him as above average at everything except hitting for average. Hmm…
What we think: For a college kid, it’s weird that people don’t agree about him. We’ll take the high road and point out that he looks like a happy kid!

Round 6 – John Gast
What we know: The news actually doesn’t sound great on Gast. He’s already had Tommy John surgery (as a high school student). He bounced back and had a decent first two years at Florida State, but this year has seen his ERA rise all the way up to 6.33.
What we think: Finding a flattering picture was a bit of a challenge here. And if we didn’t know better, we’d think this was taken in the early 1990’s. Do they recycle uniforms at FSU? Is that why it looks like they covered up an older name? 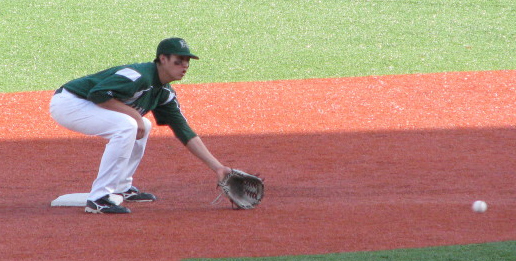 Round 7 – Greg Garcia
What we know: He plays shortstop at U of Hawaii. After losing in the regional final to Arizona State, the UH coach admitted that he assumed most of his names would get snatched in the draft, including Garcia. He was batting .359 going into the ASU game and is projected to be a plus-plus defender.
What we think: We didn’t think they played baseball in Hawaii, but now that we know this nugget of information, we’re off to buy vacation tickets. Round 8 – Daniel Bibona
What we know: The Cards drafted the lefty last year out of UC – Irvine, and he didn’t sign, choosing to do another year for the Anteaters. What he lacks in speed on his pitches he makes up for in command and precision. He’s been compared to Tom Glavine.
What we think: When we heard the Cards had drafted him twice, we had hoped it was for his #chickcomment worthiness. Of course we suppose it’s also pretty good that he’s a promising lefty!

Round 9 – Tyler Lyons
What we know: Tyler’s another lefty out of OK State. He had a 0.00 ERA (that is not a typo) in 2008 and had a chance to go in the first round, but stayed in school. His last two years have not been as good, and now instead of a power starter he projects as a middle reliever.
What we think: A cute Okie boy? Let the #chickcomments begin?!  (Line forms behind Erika!)

Round 10 – Reginald Williams
What we know: Reginald is a CF out of Middle Georgia College who projects to be a quick switch-hitter and a solid defender. His dad – Reggie Williams – was also a baseball player.
What we think: Reginald is an old man’s name. We’re going to call him Reggie from here on out.

Round 11 – Ben Freeman
What we know: Ben is a tall, skinny lefty out of a Florida high school. He had an ERA of 0.70 this year and struck out 126 in 59 2/3 innings.
What we think: How come our high school sports pictures never looked that cool?

Round 12 – Austin Wilson
What we know: We actually know more about this kid than any other in the draft. He was ranked 27th overall by Baseball America, but he’s committed to Stanford, which is why he fell 350 places below his projected value. He’s got raw power and looks to be a very good outfielder. He also has all the little intangibles – you know, work ethic, drive, character – that make him a very desirable guy to have in your system.
What we think: It’s a definitely flyer pick and it would be slightly unreasonable to expect the Cardinals to sign him. People are pointing out that it’s not really about the money – he and his family want him to go to Stanford. But, as Joaquin Andujar says, ‘youneverknow.’
That wraps up our look at the first 12 rounds of the draft. If you want to know more, head back over to Future Redbirds, because they’re into this. We’re just easily entertained. ;)